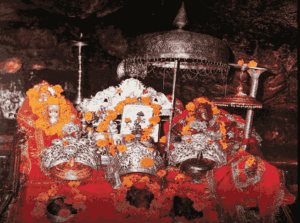 It is one of India’s most popular pilgrimage sites. Millions of devotees visit the temple each year. During festivals such as Navaratri, footfall can reach one crore. According to some authors, it is also one of the richest temples in India, with annual receipts of nearly 16 million dollars.

Both Hindus and Sikhs revere the temple. The temple has been visited by many notable saints, including Guru Gobind Singh Ji and Swami Vivekananda.

The worship of goddess Vaishno Devi is mentioned in the Mahabharata, which tells the story of the Pandavas and the Kurukshetra War. Arjuna is said to have worshipped Devi before the Kurukshetra War on Lord Krishna’s advice for blessings. The Mother Goddess appeared in front of him in the form of Vaishno Devi, pleased by his devotion. When the goddess appeared, Arjuna began praising her with a stotra in which a Shloka says ‘Jambookatak Chityaishu Nityam Sannihitalaye’, which means ‘you who always dwell in the temple on the slope of the mountain in Jambhu’ — most likely referring to modern-day Jammu.

“The Mata Vaishno Devi shrine is an ancient one whose antiquity is pre-Mahabharatham,” says former Governor of Jammu and Kashmir Jagmohan. “Lord Krishna is believed to have advised Arjuna to go up in the hills of ‘Jammu’ and seek the blessings of Vaishno Devi before taking up arms in the battlefield.” ‘Jambhu’ is associated with modern-day Jammu. While worshipping Vaishno Devi, Arjuna refers to Her as the highest Yogin, free of decrepitude and decay, the Mother of the Vedas and the Science of Vedanta, and the Giver of Victory and personification of victory itself.

It is also widely assumed that the Pandavas were the first to construct the temples at Kol Kandoli and Bhawan in honour of the Mother Goddess. Five stone structures, just adjacent to the Trikuta Mountain and overlooking the Holy Cave, are thought to be the rock symbols of the five Pandavas.

Vaishno Devi was a devout follower of Lord Vishnu who used to meditate in a cave. Bhairon Nath, a famous Hindu Tantric, is said to have fallen madly in love with the young Vaishno Devi at an agricultural fair. To avoid his amorous advances, Vaishno Devi fled into the Trikuta hills, where she later assumed the form of Durga and cut off his head with her sword in a cave.

The helicopter service begins in Katra on the foothills and ends in Sanjichhat. This visit to the sacred Shrine, surrounded by clouds, marks the start of a breathtaking heli-hop.

6 .The applicable tax rates will be charged on the date of travel at the respective location in  Katra/Sanjichhat.

You can sign up as a new devotee by clicking on the New Devotee sign up button. Make a username and password, then close all links and reopen the website page. Log in with your username and password, then click on Helicopter Services to enter the date, route, number of passengers, time, and other passenger information. Finally, click on the payment gateway link to open the bank site where you can enter your credit card number, CVV number (found on the back of your credit card), and expiry date. If the bank accepts your credit card and the message “Non secure site” appears, click Yes. Your reservation has been completed. You can get a printout of that page.

Shri Mata Vaishno Devi Shrine Board provides clean, well-maintained, and reasonably priced lodging for pilgrims. This lodging is available in Jammu (at Vaishnavi Dham, Kalika Dham, and Saraswati Dham near the Railway Station) and Katra (at Niharika, Shakti Bhawan, and Ashirwad Bhawan near the Bus Stand). The Yatries can also stay at Trikuta Bhawan in Katra, which has 700 beds. This structure is located near the 2nd Yatra counter (YRC II) in Katra. Yatries can use the Spiritual Growth Centre in Katra. This structure is close to Asia Chowk (approx. 1 km from Main Bus Stand Katra). Yatry lodging is also available in Adkuwari, Sajichatt, and Bhawan.

Although the Vaishno Devi Temple in Jammu is open to pilgrims all year, the best months to visit are March to June, and then October to November