NTR Gardens is a 36-acre (0.15 km2; 0.056 sq mi) public urban park in Hyderabad, India, adjacent to Hussain Sagar Lake. It is named after former Andhra Pradesh Chief Minister N. T. Rama Rao. The predominantly park area, which has been built in stages since 1999, is geographically located in the city centre and is close to other tourist attractions such as Birla Mandir, Necklace Road, and Lumbini Park. It is managed by the Buddha Purnima Project Authority, which is overseen by the Government of Telangana.

In 1999, a 5 acre (20,000 m2) plot of land from a 55-acre (220,000 m2) plot was used to build a memorial for N. T. Rama Rao, the former Chief Minister of undivided Andhra Pradesh. It was opened by N. Chandrababu Naidu. It was intended to expand this area, now known as NTR Gardens, by building a museum dedicated to N. T. Rama Rao. This memorial was built as part of the Buddha Purnima Project, which was overseen by the Hyderabad Urban Development Authority (HUDA) and aimed at beautifying and developing the Hussain Sagar lake and its surroundings as a major tourist attraction.

The Government of Andhra Pradesh announced plans to develop this area in 2000, including the NTR Gardens, a rock garden, and an IMAX theatre. A few days later, a government official announced that the rock garden would be built at a cost of Rs. 27 crores by Dubai-based NRIs. Second, the IMAX theatre project, estimated to cost Rs. 52 crore, was assigned to a private firm. Both projects were to be carried out on the same 55-acre (220,000 m2) plot that housed the memorial. 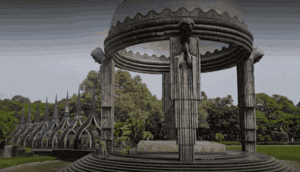