The goddess Nookambika is housed in the temple. Sri Kakarlapudi Appala Raju Payakarao, the ruler of this region, erected this temple to Kakatambika, a family goddess. Later on, she was known as Nookambika or Nookalamma. Thousands of people from all across Andhra Pradesh flock to the temple for worship on “Kottha Amavasya,” the day before Ugadi.

In ancient times, Sri Sri Sri Nookambika Ammavaru was known as Sri Anagha Devi, one of the nine Shakti forms. The temple was refurbished after a few years under the reign of the Kakatiya rulers, and the same deity was worshipped under the name Sri Kakatamba. Pujas and diparadhanas are performed here on a daily basis. The daily pujas and other ceremonies were disrupted when dynasties fell apart, and the Nookambika temple gradually lost its former splendour.

Sri Shakti Ammavaru is thought to be the universe’s creator, and that the creation took place between Palguna Bahula Amavasya (the new moon day) and April (new moon day). Several religious rites and pujas are held in honour of Sri Nookambika Ammavaru during this sacred season. For doing puja to Sri Nookambika Ammavaru, the days of Sunday, Tuesday, and Thursday are considered auspicious.

The Arcot Nawab anointed Sri Kakarlapudi Appalaraju Payakarao as King for the Anakapalli territory around 450 years ago, in late 1611 AD. He restored the temple to its former splendour and renamed the local goddess Sri Nookambika Ammavaru.

In 1937, the Endowments Department took over the Sri Sri Sri Nookambika Ammavari shrine. This temple’s funds are used to renovate temples from the Godavari districts to the Berhampur district. As executive officer, an officer from the assistant commissioner’s cadre is appointed.

The Nookambika temple annual revenue has risen to 68 lakhs. New cottages were built, as well as roads leading to the Nookalamma Temple, thanks to the generosity of contributors. 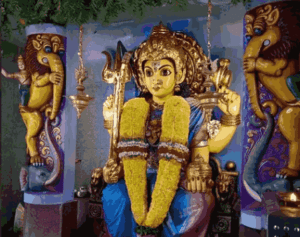