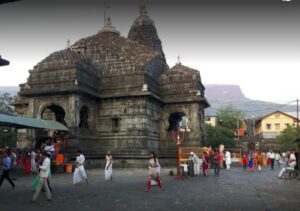 According to the Shiva Purana, once upon a time, Brahma (the Hindu God of creation) and Vishnu (the Hindu God of preservation) argued over the supremacy of creation. To put them to the test, Shiva pierced the three worlds as a massive, never-ending pillar of light known as the jyotirlinga. To find the end of the light in either direction, Vishnu and Brahma split their paths downwards and upwards, respectively. Brahma lied about having discovered the end, while Vishnu admitted defeat. Shiva appeared as the second pillar of light and cursed Brahma, saying that he would have no place in ceremonies while Vishnu would be worshiped forever. The jyotirlinga is the supreme partless reality from which Shiva appears in part. Thus, the Jyotirlinga shrines are locations where Shiva appeared as a fiery column of light. Originally, there were thought to be 64 jyotirlingas, with 12 of them considered extremely auspicious and holy. Each of the twelve jyotirlinga sites is named after the presiding deity, who is thought to be a different manifestation of Shiv. The primary image at all of these locations is a lingam representing the beginningless and endless Stambha pillar, symbolizing Shiv’s infinite nature. Somnath in Gujarat, Mallikarjuna in Srisailam in Andhra Pradesh, Mahakaleswar in Ujjain in Madhya Pradesh, Omkareshwar in Madhya Pradesh, Kedarnath in Himalayas, Bhimashankar in Maharashtra, Viswanath in Varanasi in Uttar Pradesh, Trimbakeshwar in Maharashtra, Vaidyanath in Jharkhand, Nageshwar Temple in Dwaraka, Gujarat, Rameshwar Temple in Rameswaram, Tamil Nadu, and Grishneshwar Temple in Aurangabad, Maharashtra.

On the night of the Aridra Nakshatra, Lord Shiva manifested himself as a Jyotirlinga. As a person attains a higher level of spiritual attainment, it is believed that he will be able to see the Jyotirlingas as columns of fire piercing through the earth. Each Jyotirlinga site is named after the presiding deity.Essentially, the Jyotirlinga represents Lord Shiva’s infinite nature. At the highest level, Shiva is regarded as the formless, limitless, transcendent, and unchanging absolute Brahman and the universe’s primal Atman (soul, self).

Trimbakeshwar is a religious center where one of the twelve Jyotirlingas can be found. The Jyotirlinga located here is notable for its three faces, which represent Lord Brahma, Lord Vishnu, and Lord Rudra. The linga has begun to erode as a result of excessive water use. This erosion is said to represent the eroding nature of human society.The Lingas are crowned with a jeweled crown, which is placed on top of Tridev’s Gold Mask (Brahma Vishnu Mahesh). The crown is said to be from the Pandav era and is made of diamonds, emeralds, and other precious stones. Every Monday from 4-5 p.m., the crown is on display (Shiv). 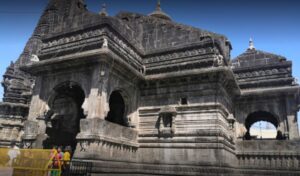 Trimbakeshwar Temple Architecture : The temple is sandwiched between three hills: Brahmagiri, Nilagiri, and Kalagiri. Shiv, Vishnu, and Brahma are represented by three lingas (an iconic form of Shiv) in the temple. The temple tank is known as Amritavarshini, and it measures 28 m (92 ft) by 30 m. (98 ft). Other bodies of water include Bilvatheertha, Viswananthirtha, and Mukundathirtha. Gangadevi, Jaleswara, Rameswara, Gautameswara, Kedarnatha, Rama, Krishna, Parasurama, and Lakshmi Narayana are among the deities depicted. There are also several monasteries and saints’ samadhis at the temple.

Pitra Dosh Puja in Trimbakeshwar and Cost is Rs 5500/- 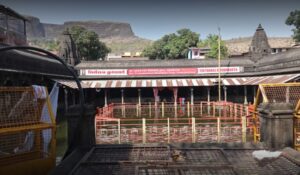 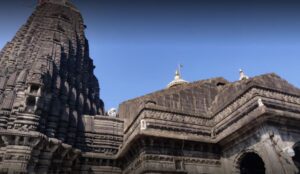