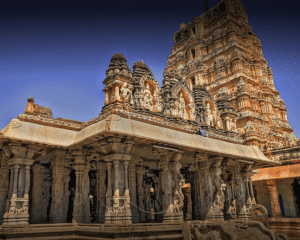 Long before the Vijayanagara capital was situated here, this area was home to the Virupaksha-Pampa sanctuary. Shiva is mentioned in inscriptions from the ninth and tenth centuries. Under the Vijayanagara kings, what had originally been a tiny temple expanded into a substantial edifice. Although the majority of the temple constructions are assigned to the Vijayanagar period, evidence suggests that the Virupaksha temple underwent additions in the late Chalukyan and Hoysala periods. Lakkana Dandesha, a nobleman serving under Deva Raya II of the Vijayanagara Empire, constructed the enormous temple structure.The Bahmani sultanates damaged and ruined the other numerous temples in Hampi, making this temple the only one that has been kept up to this point. 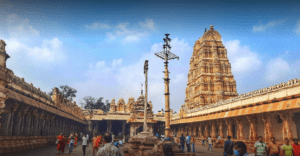 A sanctum, three ante rooms, a pillared hall, and an open pillared hall make up the main temple as it stands right now. It has intricately carved pillars as decorations. The Virupaksha temple is surrounded by a pillared cloister, entrance gateways, courtyards, smaller shrines, and other buildings.The largest at 50 metres, nine-tiered eastern doorway is well-proportioned and integrates some older buildings. It features a stone base and a brick superstructure. It provides access to the large number of sub-shrines in the outer court.The inner court with its numerous minor shrines can be accessed by the tiny eastern gateway.

The Kanakagiri gopura is another gopuram that faces north and leads to the river Tungabhadra after passing through a small enclosure with auxiliary temples.Along the top of the temple, the Tungabhadra River flows through a narrow channel before descending to the temple kitchen and exiting through the outer court. 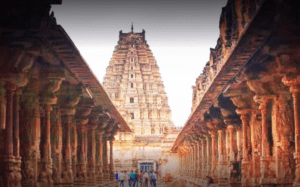 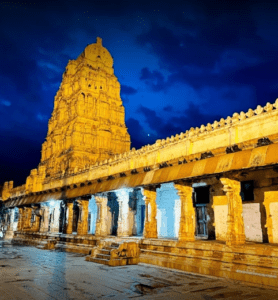