One of Kerala’s most important temples, Ernakulam Shiva Temple, also called Ernakulathappan Temple, is situated in the centre of Ernakulam, Kochi, Kerala, India. According to local Hindu beliefs and customs, the temple, which is devoted to Lord Shiva, is regarded as the city temple, with the presiding god serving as the city’s guardian.

The deity is reverently referred to as Ernakulathappan, which means Lord of Ernakulam, in accordance with typical practise in Kerala. The Durbar Hall Ground contains the temple. The history of the temple, which was one of the Kochi Maharajas’ seven royal temples, is deeply entwined with the history of the city.At the moment, Cochin Devaswam Board is in charge of running the temple. Under the active sponsorship of Diwan Sri Edakkunni Sankara Warrier, the temple was constructed in its present shape in 1846, elevating it to the status of a Royal temple in the Kochi Kingdom. The Ernakulam Shiva Temple occupies a space of one acre (4,000 m2).Along with the Ettumanoor Mahadevar Temple, Kaduthruthy Mahadeva Temple, Vaikom Temple, Chengannur Mahadeva Temple, and Vadakkunathan Temple, the temple is one of the principal Shiva temples in Kerala.

The mythology surrounding the temple has strong ties to the Hindu epic Mahabharata. The third Pandava, Arjuna, performed a painful penance to appease Lord Shiva. Shiva and Sri Parvathi left their home on Mount Kailash to meet Arjuna because they were moved by his devotion.

Shiva wants to demonstrate to Parvathi how devoted Arjuna is to him. Shiva appears before Arjuna dressed as a tribal hunter named “Kiratha.” Shiva sees a wild boar charging towards Arjuna as he approaches him and fires an arrow at the boar. The skilled archer Arjuna also fires an arrow at the boar.The disguised demon Mookasura, who was the boar, is killed, and its true nature is exposed. Arjuna and Kiratha, however, disagree on who killed the animal in question. There follows a protracted combat between the two, which ultimately ends with Kiratha defeating Arjuna.

Arjuna, who has been defeated and is unable to even stand, creates a Shiva Linga out of mud and conducts a pooja while offering flowers. He is shocked to see that the flower he placed on top of the Shiva Linga is now resting on Kiratha’s head. Then Arjuna realises that Kiratha is actually his Lord Shiva. Arjuna was given Pashupatha Arrow by Lord Shiva, who was pleased with his devotion and truthfulness.After Arjuna went, the region became quickly covered in thick forest and was long since abandoned. The Arjuna-built Shiva linga’s existence likewise vanished from everyone’s recollections.

A child named Devala, who has been cursed by a sage and now has a snake-like body, crawled into this jungle centuries later and saw this lingam entirely submerged in muck. He performed a serious penance that included worshipping this lingam in the hopes of escaping the curse. As soon as some people saw this enigmatic man with a snake-like body, they dubbed him Rishi Nagam (Saint Serpent) and were terrified to even approach him. Even attempted to stop him with sticks and other objects.Despite all of these actions, Rishi Nagam persisted in his strict penance.

When Lord Shiva and Parvathi finally manifested in their true forms, they instructed the wise man to bathe in the neighbouring pond. He was delivered from the curse as soon as he submerged. Soon after the original lingam, a new idol started to appear nearby.Based on this myth, the area was given the new name Rishnagakulam (The Pond of Rishi Nagam), and a public temple was built there.

Ernakulam Shiva Temple Dress Code : Male worshipers are not permitted to wear apparel that covers their upper torsos within the Ernakulam Shiva temple. For women, any traditional Indian attire is acceptable.

How to reach Ernakulam Shiva Temple:

By Road: Buses to Ernakulam are available from all important towns in Kerala as well as from Bangalore, Chennai, Mangalore, Salem, Coimbatore, and Madurai. The majority of long-distance buses travel through MG Road, and South or Pallimukku is the closest bus stop. The temple is about 2 KM from the KSRTC bus terminal. Once in Ernakulam town, you can take one of the local private buses.

By Train :Buses to Ernakulam are available from all important towns in Kerala as well as from Bangalore, Chennai, Mangalore, Salem, Coimbatore, and Madurai. The majority of long-distance buses travel through MG Road, and South or Pallimukku is the closest bus stop. The temple is about 2 KM from the KSRTC bus terminal.

By Air : The Kochi International Airport at Nedumbassery, which is around 20 KM from the city of Ernakulam and the temple, is the closest airport. Flights from Mumbai, Delhi, and Bangalore to Kochi are offered by Air India, an airline from India. Flying is done by Jet Airways out of Mumbai. 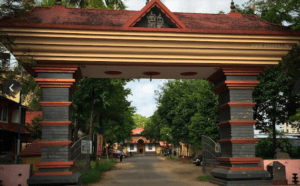 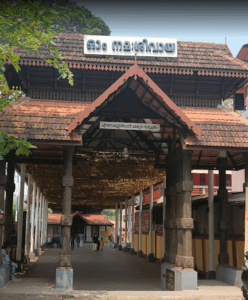 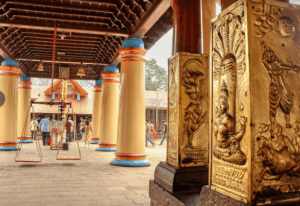