Solomon’s Temple is the biggest church in the Indian town of Aizawl, Mizoram.  It’s a famous church in Mizoram.The temple was built by the religious organisation Kohhran Thianghlim, which translates as “The Holy Church ” in English. Dr. L.B. Sailo founded the church in 1984. 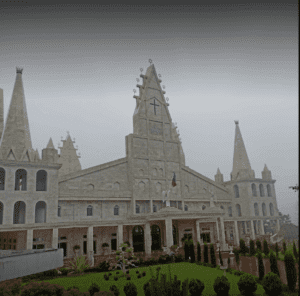 The founder of Kohhran Thianghlim Church, Dr. L.B. Sailo stated, “In 1991, God showed me Solomon’s Temple in my dreams. I had never thought of Solomon’s temple before, nor had I ever dreamed of building it, but when I saw it in my dreams in 1991, I jotted it down as soon as I woke up.” The church was constructed on the western outskirts of Aizawl, the capital of India’s Mizoram state. The foundation stone was laid on December 23, 1996, and construction was completed 20 years later, with the temple inaugurated during a Christmas service in 2017.

The Temple area has a capacity of 2,000 people in the main hall and 10,000 in the courtyard. It is a square site with 180 feet on each side. The Temple’s interior is also square, measuring 120 feet on each side. On all four sides, a 30-foot-wide verandah is attached to the exterior of the main hall. This structure, known as ‘The Porch of Solomon’s Temple,’ provides shelter for people with its large seating capacity.

The main structure has twelve main doors, three on each wall. The Temple’s faces face exactly south, north, east, and west. Above the porch are four pillars, each with seven David’s stars representing the seven churches of the Book of Revelation. Each pillar bears a representation of the Cross of Jesus Christ, as well as the Holy Church’s emblem. An idol of two Angels blowing trumpets stands atop the porch, facing the top of the pillar and flanking the northern side of the pillar, which is now used as the main entrance. Each corner of the temple has a tower.Each tower is crowned with the Crown of Salvation, the Crown of Righteousness, the Crown of Life, and the Crown of the Overcomer. Two intersecting horizontal ridges cross in the middle of the pitch roof, forming a cross when viewed from above, symbolising the new covenant. There are 32 windows, 32 ventilations, and 32 skylights in the Temple. It is a multi-story structure.

The temple’s construction cost $3 million. The majority of the financial needs were met by church members. Donations were also collected globally, but the funds collected were less significant.

Service at the Temple

Every Sunday, the temple hosts church services, as well as special events such as the Zanlai Au Aw (Midnight Herald) Anniversary, which is organised by the Publication Board of Kohhran Thianghlim, and Missionary Day, which is organised by the Mission Board and Jerusalem Khawmpui in the last part of December every year. It is also used as a blood donation centre by the Church’s youth wing, the Youth Evangelical Front.