Sheetla Mata Mandir Gurgaon is a Hindu temple dedicated to the goddess Shitala (Sheetla), wife of Guru Dronacharya, who, according to the Indian epic Mahabharata, was the teacher of the Pandavas and Kauravas. The temple is located on Sheetla Mata Road in Gurugram (previously known as Gurgaon), the city of Gurugram district in the Indian state of Haryana.

The shrine is well-known and draws a large crowd during Navratri and other festivals.

Kirpai, also known as Lalita and later Mata Sheetla, used to live in the nearby Union Territory of Delhi village of Keshopur. Dronacharya, her husband, used to come to Keshopur every day from his Gurugram ashram.

She devoted herself to caring for sick children, particularly those suffering from smallpox. People referred to her as Mata (Mother) with affection and respect. After her death, the villagers erected a temple in her honour, and she became known as Mata Sitla or Mata Masani, i.e. “the goddess of smallpox.”

Masani Mother is said to have appeared in a dream to Chaudhri Singh Ram alias Singha, a Jat from the village Gurugram, more than three centuries ago. She expressed a desire to relocate from Keshopur to Gurugram. She forced him to construct a home for her.

According to legend, even after Singha brought and installed the goddess Masani, as her heart desired, in village Gurugram, the residents of Keshopur continued to dispute Gurugram’s claims. This controversy was settled during the reign of Begum Samru, the Mughal Governor of Jharsa. Her child, who had contracted smallpox, was cured after being consecrated before the goddess Masani at Gurugram in the prescribed manner. It was then determined that the goddess had moved to the village of Gurugram.

The current Sheetla Mata Mandir Gurgaon was built in the 18th century by Hindu Jat king Jawahar Singh of Bharatpur in commemoration of his victory over the Mughals, for which he had sought Sheetla Mata’s blessings.

sheetla mata mandir gurgaon rush timings: The visit to the Sheetla Mata Mandir in Gurgaon can last anywhere from 2 to 3 hours.

During Navratris, the sheetla mata mandir gurgaon is open 24 hours a day and closed for one hour for cleaning and bhog.

There is free parking available there. Car Parking is available opposite the Sheetla Mata Mandir Gurugram. Parking is difficult to come by, especially during Navratri.

The closest distance from National Highway 8 is approximately 6 kilometres. Intercity buses, private cabs, and autos provide transportation to the shrine within the city.

Huda City Metro Station, located 6.6 kilometres from the shrine, is the nearest railway station. Previously, there was no direct public transportation connection to the shrine from the metro station.

Gurugram Railway Station is the nearest railway station, located 2.7 kilometres from the shrine. The shrine can be reached directly by auto rickshaw from the railway station at regular intervals. The metro station Iffco Chowk is nearby.

Indira Gandhi International Airport (IGI) in New Delhi is about 17 kilometres away from Sheetla Mata Mandir in Gurugram.

There are intercity buses and private cabs that run from the airport to the shrine, but there is no direct connection.

The main article is: Bhim Kund in Gurugram

Gurugram Bhim Kund, also known as Pinchokhda Jhod, is a 10-acre wetland in Bhim Nagar locality of Gurugram city of Gurugram district in the Indian state of Haryana. It is located approximately 3 kilometres from Rajiv Chowk in Gurugram, between sectors 4, 6, and 8.

In Khandsa village, Sector 37 of Gurugram city, Haryana state of India, there is an Eklavya temple dedicated to Mahabharata hero Eklavya. According to legend, this is Eklavya’s only temple and the location where Eklavya cut his thumb and offered it to Guru Drona. Locals want the government to create a tourism circuit in their honour to honour Drona and Eklavya. 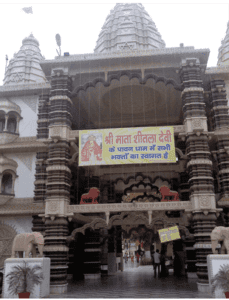