Shamlaji Temple is In India’s state of Gujarat, there is a significant Hindu pilgrimage site called Shamlaji, also spelled Shamalaji. The temple in Shamlaji is devoted to Vishnu. Other Hindu temples can be found close by.

The current Shamlaji temple was probably started in the 11th century in Chalukya style, but the current building dates from the 15th and 16th centuries. Shamlaji is a form of Vishnu. The statue of Vishnu in the sanctuary is most likely from the seventh or eighth century, and the Shiva statue in the small temple across the street is from the sixth century. The tiny Harishchandra Chauri Temple, built in the ninth century, has a gateway nearby and is the oldest intact temple. Numerous temple ruins, dispersed idols, and old brickworks surrounding the area prove its antiquity. In the sixth century, Shamlaji was a significant Hindu centre and was likely the location of a sculpture workshop whose works can be found as far away as Mumbai, where the Parel Relief was discovered. The majority of the blueish schist-based ancient sculpture discovered at Shamlaji has since been transported to museums, particularly those in Mumbai and Vadodara. 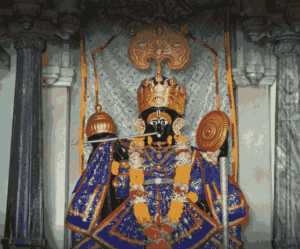