Nageshwar , one of the twelve Jyotirlingas, is a mythological temple recorded in the Shiva Purana. Nageshwar Jyotirlinga is situated in Dwarka, Gujarat, India.

According to the Shiva Purana, Nageshvara Jyotirlinga is located in “the Darukavana,” an old name for an Indian forest. Indian epics like Kamyakavana, Dvaitavana, and Dandakavana all make reference to “Darukavana.”An incident involving the Nageshvara Jyotirlinga is described in the Shiva Purana. A demon by the name of Daruk assaulted a Shiva devotee named Supriya and imprisoned them all in his underwater city of Darukavana, which was populated by demons and sea snakes.In response to Supriya’s desperate pleas, the inmates began reciting the Shiva mantra, at which point Lord Shiva arrived and destroyed the demon, later settling there as a Jyotirlinga. A demoness named Daruka who adored Mata Parvati was the demon’s wife.She was able to control the woodland where she did her devotions thanks to her penance and devotion, and Mata Parvati gave the forest the new name “Darukavana” in her honour. The forest followed Daruka everywhere she went. Daruk gathered the strength Parvati had given her in order to protect the demons of Darukavana from the punishment of the gods.The entire forest was then transported into the ocean, where they began their war against the hermits by capturing people and imprisoning them in their new underwater stronghold, which is how that great Shiva devotee, Supriya, had ended up there.

A revolution was started by Supriya’s entrance. He erected a lingam, and while he offered prayers to the lingam, he ordered the inmates to sing the Shiva mantra Om Namaha Shivay. The chanting caused the demons to try to kill Supriya, but they were stopped when Shiva showed up and gave him a divine weapon, saving his life.The remaining demons were saved by Parvati when Daruka and the demons were vanquished. The tenth lingam, Nagesha, is the name of the one Supriya had erected. The Goddess Parvati was known as Nageshwari, while Shiva once more took the shape of a Jyotirlinga with the name Nageshwar. Then, Lord Shiva declared that he would guide anyone who would worship him in the right way.

The greatest time to travel is between November and February, especially during the highly observed festival of Shivratri.

How to Reach Nageshwar Temple?

By Air: The distance between Jamnagar Airport and the temple is 137 kilometres.

By Road: Direct buses are accessible from Ahmedabad and Jamnagar. 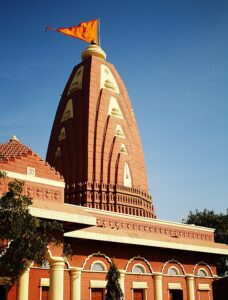 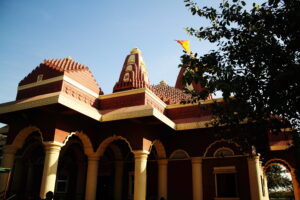 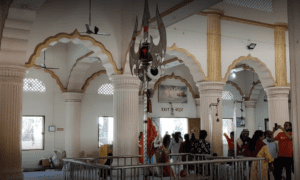