Snow World is an amusement park on approximately 2 acres in Hyderabad, Telangana, India (0.81 ha). The park, which is located next to Indira Park and along the Hussain Sagar lake, was opened on January 28, 2004.

Ocean Park Multitech Ltd. leased the 2 acres (0.81 ha) plot from the Government of Andhra Pradesh for 33 years at a cost of 3.6 million (US$47,000) per year. Every year, the lease amount was to increase by 5%. The 17,000 square feet (1,600 m2) facility was designed by Nitish Roy, a well-known Indian art director, production designer, and architect, and cost $20 million (US$260,000). The facility, built in collaboration with the local tourism department, is India’s first and largest in the world, and it is only the third such snow park in the world, following those in Malaysia and Singapore.

The facility was inaugurated on January 28, 2004 by then-Andhra Pradesh Chief Minister Chandrababu Naidu. Despite the fact that it was not intended to be open for visitors on that day, some of them went inside. They became giddy after inhaling too much nitrogen in the air, which is used to make snow. Due to the snow and cold, some of them developed swollen hands, feet, and faces.

A massive 200 tonnes of artificial snow was laid on the specially prepared layered flooring to prevent seepage or melting. The top layer of snow is cleaned every day, and an additional two to three tonnes of snow generated within the facility is used to top the snow spread. The artificial snow is created using a patented Australian technology. The snow is made from water that has been filtered four times, ensuring that it will not harm children if they consume it, as they are prone to doing in other locations.

In a single day, the park can accommodate 2,400 visitors. Every visitor is gradually acclimated to lower temperatures, starting with 20 °C (68 °F), then 0 °C, and finally sub-zero temperatures. This method is accepted all over the world.  Visitors are also given protective clothing such as extra-warm sweaters, jackets, and snow caps, as well as a steaming cup of soup broth to help them acclimate to the rapid but gradual temperature change.The internal area, known as the Cryo Zone, keeps a constant temperature of – 5 °C. A maximum of 300 visitors can explore the various facilities such as the kids snow play area, snow wars, snow tube slide, sleigh slide, ice-bumping cars, merry-go-round, and an ice skating rink for one hour.

A snowfall feature was added a few months after its debut. Visitors are exposed to snowfall for five minutes just before a session ends, which is said to be the first of its kind at any show theme park or snow dome in India.  A 40,000 square feet (3,700 m2) kart racing track was opened to the public at a cost of $25 million (US$330,000). The thematic indoor go karting arena was built in one year by 300 workers. The interior is designed to look like a cave and was created using plaster of Paris. The facility sought certification from the Motor Sports Association of India after installing an exhaust system and a fresh air system to ensure an uninterrupted supply of fresh air. 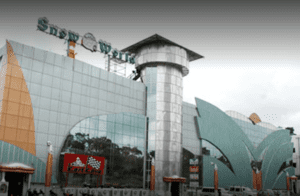