Hussain Sagar (also known as Tank Bund) is a heart-shaped lake in Hyderabad, Telangana, built in 1563 by Ibrahim Quli Qutb Shah. It covers an area of 5.7 square kilometres (2.2 square miles) and is fed by the Musi River. A large monolithic statue of Gautama Buddha, erected in 1992, stands in the middle of the lake on Gibraltar Rock. It also separates Hyderabad’s city centre from its neighbour Secunderabad.The lake’s maximum depth is 32 feet (9.8 m)

Ibrahim Quli Qutb Shah constructed Hussain Sagar across a tributary of the Musi river in 1563. The lake was named after Hussain Shah Wali, the Kingdom’s Master of Architecture. It is an artificial lake that is perpetually fed by canals from the Musi River. Before Himayat Sagar and Osman Sagar were built on the Musi River, Hussain Sagar was the main source of water supply to Hyderabad.

The Buddha statue was carved from a 450-ton white granite rock. It took 200 sculptors two years to complete. In November 1988, the statue was transported to Hyderabad. After some difficulties, the statue was erected on a red lotus pedestal on April 12, 1992.

When Sir Mirza Ismail was prime minister of Hyderabad Deccan in 1946, the Tank Bund road was widened. The Tank Bund was further expanded and beautified by the then-Andhra Pradesh Chief Minister N.T.Rama Rao in 1987-88, with the addition of fountains with dancing waters, tantalising coloured lights at night, and bronze statues of renowned personalities.

Hussain Sagar Thermal Power Station was built on the banks of Hussain Sagar Lake in 1920 by the 7th Nizam Mir Osman Ali Khan. It was South India’s first thermal power station. From 1920 to 1983, it supplied electricity to the twin cities of Hyderabad and Secunderabad.

From atop the Rock of Gibraltar, an 18-meter-high monolithic statue of Lord Buddha towers over the lake. N. T. Rama Rao developed the concept as part of the Buddha Poornima project in 1985. The statue was carved out of a 450-ton white granite rock. It took 200 sculptors two years to complete. In November 1988, the statue was transported to Hyderabad. After some difficulties, the statue was erected on a red lotus pedestal on April 12, 1992.

Hyderabad is the state capital of Telangana (separated from Andhra Pradesh on 2 June 2014). N. T. Rama Rao was the Chief Minister of Andhra Pradesh from 1983 to 1989. During his presidency, he spent a lot of money erecting statues of people from the region’s political and religious history. He saw the Statue of Liberty during his visit to New York and was inspired by the efforts to restore it. “I wanted something like that wonderful place to visit… That would have been my contribution to society,” he explained.

Rama Rao depicted Gautama Buddha because “He was a humanitarian who told the people the whole truth. It is our source of pride.” He discovered a solid white granite rock on a mountainside 46 kilometres outside Hyderabad near Raigir, Bhuvanagiri (Yadadri Bhuvanagiri district). NTR began structure work in October 1985. Hundreds of labourers assisted temple architect and builder S.M.Ganapathi Sthapathi in the creation of the statue over a year. After five years and a US$3 million investment, the statue stood at 58 feet (18 m) and weighed 350 tonnes, making it the world’s tallest monolithic Buddha statue Hyderabad.To aid in the erecting of the statue, a 15-foot (4.6-meter) concrete platform known as the “Rock of Gibraltar” was built in the middle of Hussain Sagar. The city’s roads were also widened for this purpose.

This statue can be found in Lumbini Park on Hussain Sagar Island, which can be reached by boat in 15 minutes. The statue is close to the metro stations Lakdi-Ka-Pul, Khairatabad, and Assembly Hyderabad.

places to visit near hussain sagar

Lumbini Park is a 7.5-acre (3.0-hectare) urban park adjacent to Hussain Sagar. It was built on 5 acres (2.0 ha) of land as part of the Buddha Poornima project at a cost of INR 2.35 crores. It has a laser auditorium, boating facilities, and musical fountains, among other things.

Birla Mandir refers to various Hindu temples built by the Birla family in various cities. All of these temples are magnificently built with white marble on the Naubat Pahad, a 280-foot-high hillock to the south of Hussain Sagar. Swami Ranganathananda of Ramakrishna Mission dedicated the temple in 1976 after a ten-year construction period.

Sanjeevaiah Park is a public park and green space to the north of the lake. The park, which spans 92 acres (37 ha), is named after Damodaram Sanjivayya, the former Chief Minister of Andhra Pradesh. The Hyderabad Metropolitan Development Authority manages the park, which won the Best Open Landscape award at the 2010 Indian National Trust for Art and Cultural Heritage award presentations.

Prasads IMAX is a 235,000 sq ft (21,800 m2) multiplex that houses an IMAX movie theatre, a five-screen multiplex, a food court, multinational fast food outlets, a gaming zone, and a shopping mall on two levels of the complex. It is India’s third IMAX cinema.

Snow World is an amusement park near Indira Park and the Hussain Sagar Lake. In a single day, the park can accommodate 2,400 visitors. Visitors are exposed to snowfall for ten minutes every hour, which is said to be the first of its kind at any show theme park or snow dome in the world.

NTR Gardens is a 55-acre (0.22 km2; 0.086 sq mi) urban park adjacent to Hussain Sagar Lake. The park, which has been built in stages since 1999, is now managed by the Buddha Purnima Project Authority, which is overseen by the Government of Telangana. The park is named after and houses a memorial to N T Rama Rao, a matinée idol and former Andhra Pradesh Chief Minister who died on January 18, 1996. 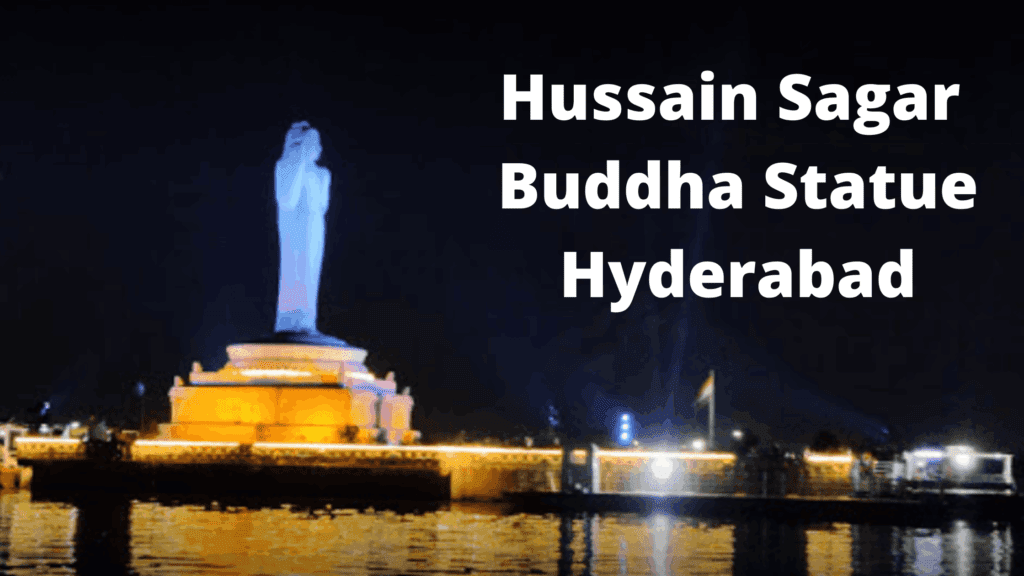