The Charminar is a monument in Hyderabad, Telangana, India, built in 1591. The landmark has become a global symbol of Hyderabad and is one of India’s most recognised structures. It has also been officially adopted as the Telangana state emblem. The Charminar has a long history, including the presence of a mosque on its top floor for over 425 years. While historically and religiously significant, it is also known for the popular and busy local markets that surround the structure, and has become one of Hyderabad’s most popular tourist attractions.As it is adjacent to the city’s main mosque, Makkah Masjid, across the road, Charminar is also a site of numerous festival celebrations, such as Eid-ul-Adha and Eid al-Fitr

The Charminar is located on the Musi River’s east bank. The Laad Bazaar is to the west, and the richly ornamented granite Makkah Masjid is to the southwest. It is listed as an archaeological and architectural treasure on the Archaeological Survey of India’s official “List of Monuments.” The English name is a combination of the Urdu words chr and minar or meenar, which translates to “Four Pillars”; the eponymous towers are ornate minarets attached to and supported by four grand arches..

Muhammad Quli Qutb Shah, the fifth ruler of the Qutb Shahi dynasty, built the Charminar in 1591 after relocating his capital from Golkonda to the newly formed city of Hyderabad.

The Archaeological Survey of India (ASI), the structure’s current caretaker, mentions in its records, “Charminar was built for a variety of reasons, according to various theories. However, it is widely assumed that Charminar was built in the city centre to commemorate the abolition of plague “, a lethal disease that was widespread at the time. The Charminar was built in 1591 CE to commemorate the beginning of the second Islamic millennium, according to Jean de Thévenot, a 17th century French traveller whose narration was supplemented with available Persian texts (1000 AH).The event was widely celebrated throughout the Islamic world, so Qutb Shah founded the city of Hyderabad to commemorate it with the construction of this building. 17–19 It is also known as the Arc de Triomphe of the East due to its architecture.

The Charminar was built at the crossroads of the historical trade route that links the city to international markets via the port city of Machilipatnam.  195 The Charminar was built as the focal point of Hyderabad’s Old City. The city was divided into four quadrants and chambers around the Charminar, according to the established settlements. The Char Kaman, or four gateways, are built in the cardinal direction to the north of Charminar.  170 The city plan was also developed in collaboration with eminent Persia architects. The structure was designed to be both a mosque and a madrasa. It has an Indo-Islamic architectural style with Persian architectural elements.Before the actual construction, a sample of Charminar is said to have been created at the Dabirpura/Nagabola graveyard.

According to historian Masud Hussain Khan, the construction of Charminar was completed in 1592, and the city of Hyderabad was actually founded in 1591. 4 According to the book “Days of the Beloved,” Qutb Shah built the Charminar in 1589, on the site where he first saw his future queen Bhagmati, and after her conversion to Islam, Qutb Shah renamed the city “Hyderabad.” Though historians and scholars dismissed the story, it became popular folklore among the locals. 3, 12

Qutb Shah was another early Dakhani Urdu poet. He prayed in Dakhini couplets while laying the foundation of Charminar, which are recorded as follows:

The Charminar Masjid is a square structure with each side measuring 20 metres (66 feet). Each of the four sides is adorned with one of four grand arches, each of which faces a fundamental point that opens directly onto the street in front of it. A 56-metre-high (approximately 184-foot) minaret with a double balcony stands at each corner. A bulbous dome crowns each minaret, with dainty, petal-like designs at the base. Unlike the Taj Mahal’s minarets, Charminar’s four fluted minarets are integrated into the main structure. The upper floor is reached via 149 winding steps. The structure is also notable for its abundance of stucco decorations and the layout of balustrades and balconies.

Rs. 200/- per person for foreign nationals

Charminar is surrounded by tourist attractions. This monument is the central focus of Hyderabad’s Old City, which is located on the east bank of the Musi River. The Laad Bazaar is to the west, and the richly ornamented granite Mecca Masjid is to the southwest. Salar Jung Museum, another important destination to visit, is only 1.4 kilometres away. If you take the southern route, you can also visit the Nehru Zoological Park, which is only 4 kilometres away from Charminar. You can also stop by the grand Chowmahalla Palace on your way south. 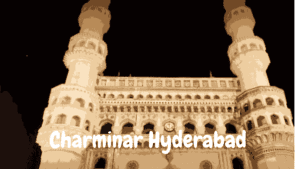 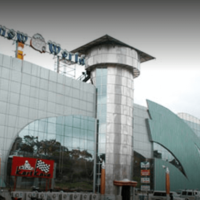 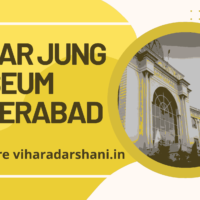