A historical fort from the 11th century, Chandragiri Fort is situated at Chandragiri, Tirupati, Andhra Pradesh, India. Although primarily linked to the Vijayanagara Emperors, it was really constructed much earlier, in the 11th century, by the Yadava emperors. Odra Gajapati Kapilendra Dev conquered the Chandragiri Kota in the year 1460 A.D.

After around three centuries of royal reign, Chandragiri came under the dominion of the Vijayanagarayadava kings in 1367. Saluva Narasimha Deva Raya was the ruler during the 1560s when it first gained popularity. Later, until his coronation at Penukonda, the most famous Vijayanagara empire Srikrishna Devaraya was imprisoned in this Chandragiri Fort as a prince. At this fort, it is also stated that he met his future queen Chinna Devi.The Golconda sultans assaulted Penukonda, forcing the Rayas to relocate their capital to Chandragiri, the fourth capital of the Vijayanagara Empire. The Chandragiri Kota was added to the Golconda region in 1646 and afterwards came under the control of the Kingdom of Mysore. Starting in 1792, it vanished into obscurity.  The Raja Mahal Palace is now a museum of antiquities.

The palace is an illustration of Vijayanagara-era Indo-Saracenic architecture. The crowned towers are an example of Hindu architecture. The palace was built entirely out of stone, brick, and lime mortar. In this fort, major kavyas or epic poems were composed with the support of Vijayanagara kings. There are eight temples, Raja Mahal, Rani Mahal, and other derelict buildings inside the Chandragiri Fort.

Raja Mahal and Rani Mahal, which have been inside the fort for more than 300 years, have been kept in good condition, and Raja Mahal has been turned into an archaeological museum by the Indian Archeological Survey. Models of the main temple, the Chandragiri Kota, and other nearby buildings are on display in the museum. The sole materials employed in the construction of either of these buildings were lime, brick, and mortar. Epigraphical evidence indicates that Rani Mahal was also utilised as a commander’s quarters. It features a flat roof and sturdy foundation.

The second show, which is an English version, begins at 7:30 p.m.

How to reach Chandragiri Fort from Tirupati: 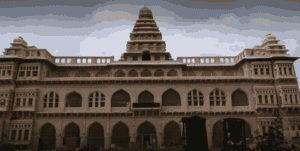