Urukunda Veeranna Swamy Temple(Urukunda Eranna Temple) is a well-known temple in Kowthalam Mandalam’s Urukunda Village. The most important God, according to pilgrims, is Errana. Sri Narasimha Eranna Swamy Temple is another name for Urukunda Eranna Temple. In the temple, Sri Veerabadra Swamy and Lakshmi Narasimha Swamy are both worshipped in the Veera Saiva tradition. Within the Sanctum Sanctorum, there is a Peepal tree; the temple has no roof.

Festivals are held every year during the month of Shravan. This month’s Mondays and Thursdays are considered auspicious days to visit the urukunda veeranna swamy temple  and worship God. It is considered most auspicious to worship Lord Veeranna and Sri Narasimha Swamy on the third Monday of Shravan month. Every year, between 10 and 15 lakh people are expected to visit this urukunda veeranna temple during the Shravan month. Devotees bathe in the Tungabhadra river canal and cook their meals here, which they then give to God. Prasad is the food that is offered to God and then distributed to other devotees.

The month of Shravan falls during the rainy season, so the land will be muddy. Fire is said to have broken out solely due to God’s influence, and the food was cooked despite the fact that it was cooked on wet ground. The final day of the festival is known as the ‘Yeti Yatra.’ The lord statue is held in a chariot and taken by walk to the Tungabhadra river, which is 15 kilometres away from the Urukunda Veeranna Swamy Temple, on the last Monday of Shravan month. On the way back to the urukunda temple after the abhishekam of the Lord’s statue at the Tungabhadra river, the chariot is greeted with pomp and circumstance by all the villagers. In these villages, a running race, kolata, and other traditional games were held on this day.

A large number of pilgrims visit this temple to give prayers on Mondays, Thursdays, and New Moon (Amavashya) days. This Urukunda Veeranna Swamy Temple is where local marriage ceremonies begin.

Urukunda’ Village is located in Kowthalam Mandalam, Kurnool District, for (Urukunda Eranna Swamy). He is the most dominant God on the planet. Hiranya (also known as Eranna or Veeranna in these parts) was a sage who spent several years doing penance under a Peepal tree in Urukunda village. All of the village cows used to congregate around him, and he spent a lot of time pampering and conversing with them. Villagers gave him fruits and food and asked for his blessings. These kind villagers’ chronic diseases and ailments were cured thanks to Sage Eranna.

Another version of the story claims that Sage Eranna preached a lot about Saiva-Vaishnava unity, and that after he vanished, two idols of Veerabhadra and Lakshmi Narasimhaswamy were discovered beneath the Peepal tree, and the villagers began worshipping them together in the same Sanctum Sanctorum. To this day, Veerabhadra Swamy and Lakshmi Narasimha are both worshipped according to Veera Saiva tradition.

Urukunda Veeranna Swamy Temple Accommodation: Temple Choultries are available for accommodation. The urukunda eranna swamy sadhan have available around 400 rooms, which includes a/c and non a/c. Room rent starts from Rs. 200 to Rs. 450.There is an advance for urukunda temple room booking in temple premises. 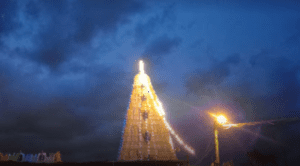 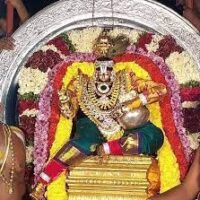 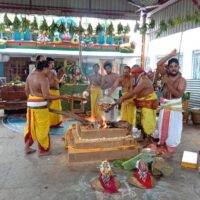