Kurnool is a city in Andhra Pradesh, India, and the state’s judicial capital. The city is also referred to as “Rayalaseema’s Gateway.” Kurnool has a lot of shiva temples. Among these ancient temples, Ahobilam, Mahanandi, and Yaganti temples are some of the most famous in Andhra Pradesh.

Ahobilam: Ahobilam Temple is a temple in Ahobilam, India. The Eastern Ghats’ picturesque hills, with many mountain hills and gorges, surround Ahobilam Temple. It is the place of worship for Narasimha, Vishnu’s lion-headed avatar, to whom all nine Hindu temples and shrines are dedicated. The main village and a temple complex are located in Lower Ahobilam. Upper Ahobilam is about 8 kilometers to the east.

Mahanandi: Mahanandi Temple is a village located east of the Nallamala Hills near Nandyal, Kurnool District, Andhra Pradesh, India. It is surrounded by woods. Within 15 kilometers of Mahanandi, there are nine Nandi shrines known as Nava Nandulu. Mahanandi is one of the Nava Nandis. The Mahanandiswara Swamy Temple, an important shrine, is located here.

Yaganti: Sri Yaganti Uma Maheswara Temple, also known as Yaganti, is a Lord Shiva temple in the Kurnool district of Andhra Pradesh, India. It was constructed in the Vaishnava tradition. History of Yaganti Temple: King Harihara Bukka Raya of the Vijayanagara Empire’s Sangama Dynasty built the temple in the 15th century.

Sangameshwara Temple Kurnool: Sangameshwara temple is a Hindu temple located in Kurnool District, Andhra Pradesh, India. It is located near Muchumarri, on the foreshore of the Srisailam reservoir, near the confluence of the Krishna and Bhavanasi rivers, where it is submerged for part of the time, surfacing when the water level drops to an acceptable level.

Other Temples in Kurnool District: 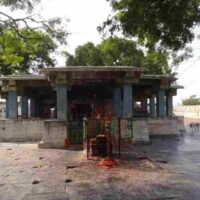 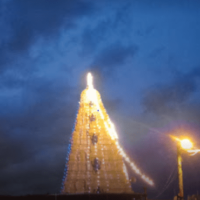