Every year in the month of Magha and on the day of Maghashuddha Ekadashi, the Vuyyuru Veeramma Talli Temple Tirumallu, which are well-known in Krishna district, begin and last for 15 days (February). The town of Vuyyuru, as well as the nearby villages, are booming these 15 days.

Near the Vuyyuru Veeramma Talli Temple, there is another shrine dedicated to the goddess. It is regarded as the birthplace of mothers. The mother leaves her birthplace on the first day of the festivities and enters the Vuyyuru Ammavari Temple the next.

On the first day, it is expected that about one lakh devotees will flock to Thiru Gandadeepa to pay homage to the plants. According to Anavaiti, the Vuyyuru police will kick off the festivities on the first day by displaying yellow saffron and new clothing. Thousands of women and devotees planted lanterns when Veeramma’s mother left Mettin on the first day. The goddess follows her around until she reaches the Vuyyuru Veeramma Talli Temple and lights the lamp.

The cradle festival is held in grand style at Vuyyuru Koodali on the evening of the second day of the festival.

On the 11th day, the Sidibandi festival is held. In the Sidibandi Gampa, a Dalit youth is seated and turned around in the temple grounds. The devotees stopped thrashing the young man with bananas at this stage. On the 15th day, the feast comes to an end.

People from all over the world, as well as those from the villages surrounding Krishnajilla, come to participate in the fair and pay a visit to Amma.

Vuyyuru is a Krishna district town near Vijayawada. During the festival, RTC will organise special buses from Vijayawada bus station. The nearest railway station to those coming from outside is Vijayawada. 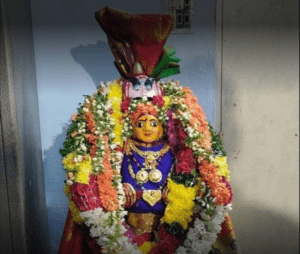