The Siddhivinayak Temple is a Hindu temple dedicated to the Hindu god Lord Ganesh. It is situated in Prabhadevi, mumbai, Maharashtra, India. On November 19, 1801 it was built by Laxman Vithu and Deubai Patil.Siddhivinayak Mandir is one of India’s most valuable temples.

The shrine for Siddhi Vinayak is housed in a small mandap at the temple (“Ganesha who grants your wish”). The sanctum’s wooden doors are carved with images of the Ashtavinayak (the eight manifestations of Ganesha in Maharashtra). The sanctum’s inner roof is gold-plated, and the central statue is of Ganesha. There is also a Hanuman temple on the outskirts. The temple’s exterior consists of a dome that, in the evenings, is lit up with a variety of colors that change every few hours. Shri Ganesha’s statue is located directly beneath the dome. 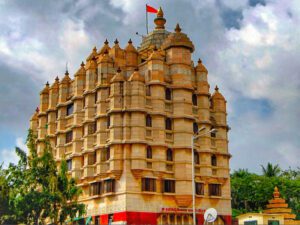 On November 19, 1801, the siddhivinayak mandir was built. The Siddhivinayak Temple‘s original structure was a small 3.6 metre x 3.6 metre square brick structure with a dome-shaped brick shikhara. Laxman Vithu Patil, a contractor, built the temple. The structure was paid for by a wealthy Agri woman named Deubai Patil. Deaubai built the temple in order for Ganesha to grant children to other infertile women who were childless due to infertility. On the orders of his guru, Ramakrishna Jambhekar Maharaj, a disciple of the Hindu saint Akkalkot Swami Samarth, buried two divine idols in front of the temple’s presiding deity. According to legend, a mandar tree grew at the site of the icons’ burial after 21 years, with a svayambhu Ganesha in its branches, just as Swami Samartha predicted.

The 2550 temple complex included two 3.6-metre Deepamalas, a rest house, and caretaker quarters. On the eastern and southern sides of the temple, there was a lake 30 x 40 square meters in size. The lake, dug by Nardulla in the early nineteenth century to alleviate water scarcity, was later filled in, and the land is no longer part of the temple complex. A small Hanuman shrine was built in the temple complex around 1952 for the Hanuman icon discovered during the road extension project of Sayani Road near Elphinstone Road. The temple’s fame grew in the 1950s and 1960s, and a large number of devotees began to visit. However, during the same time period, the plot’s owner sold some of the temple land, reducing the complex’s size. The number of devotees increased dramatically after 1975. 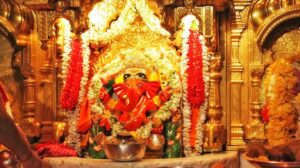 Pooja Activities from Wednesday to Monday at Siddhivinayak Temple : 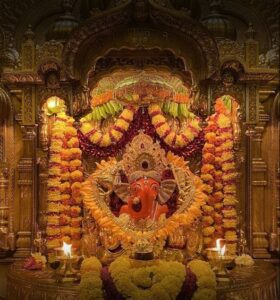 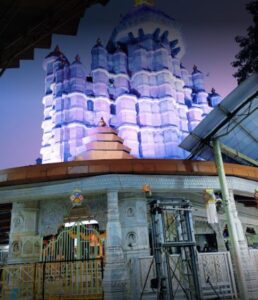