The ancient temple of Sri Sharada, the presiding deity of Sringeri, has a glorious history that begins with Sri Sankara Bhagavatpada’s establishment of the Dakshinamnaya Peetham. Originally, it was a simple shrine with the Murti of Sharada made of sandalwood installed over the Sri Chakra carved on a rock by Sri Adi Shankara. Sri Bharati Krishna Tirtha and Sri Vidyaranya subsequently had a temple built in the Kerala style, with a timber and tiled roof. The sandalwood idol was replaced by the current golden idol by Sri Bharati Krishna Tirtha. 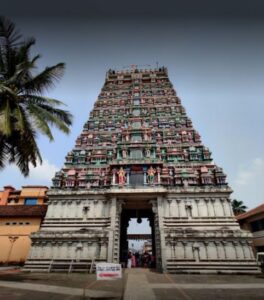 Sri Sacchidananda Shivabhinava Nrisimha Bharati built the current structure in granite, with polished granite walling around the sanctum, and Sri Chandrasekhara Bharati consecrated it in May 1916. Sri Abhinava Vidyatirtha improved the temple in a number of ways. The Mahamandapam has massive stone pillars exquisitely carved with deities such as Durga, Raja Rajeshwari, Dwarapalakas, and Devis, all sculpted according to Tamilnadu’s Shilpa Sastras.The Murti of Sri Sharada, sanctified by the worship of an unbroken succession of Acharyas of the highest purity, loftiest devotion, and unrivaled mantric powers, radiates grace and blessings.

The current Jagadguru Shankaracharya Sri Bharati Tirtha Mahaswamigal dedicated a rupee one crore Golden chariot to Goddess Sharada in Sringeri in 1999. On the occasion of the Jagadguru’s golden jubilee Vardhanthi (Birthday), golden doors were installed and inaugurated at the entrance to the sanctum sanctorum of Sri Sharada temple. The gold door covering, worth Rs. 24 lakh, is a magnificent work of art. The figures of Ashta Lakshmi are inscribed on the eight panels. 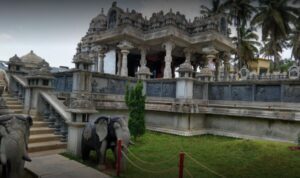 Vijaya Dasami, Lalita Panchami, Akshaya Triteeya, and/or Moola Nakshatra day (provided these do not fall on Amavasya Tithi) are considered auspicious days for performing Aksharabhyasa. Aksharabhyasa is performed on all days for the convenience of devotees.

How to reach Sringeri Sharadamba Temple :

Via Air :Mangalore International Airport, located 105 kilometers away, is the nearest airport.

Via Bus :A well-connected road network connects the town to Mangalore and Chikkamagaluru. Udupi is also 80 kilometers away. Several private and KSRTC buses run from Bangalore and Sringeri to Shimoga. 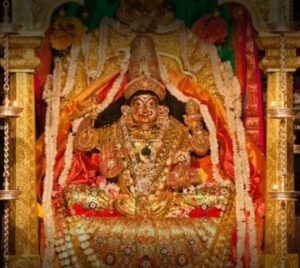 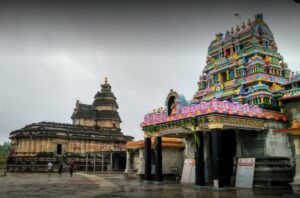