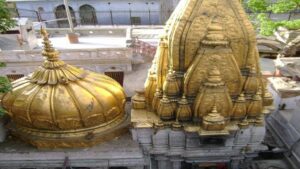 For a long time, the Kashi Temple has been mentioned in Hindu scriptures as a central part of Shaiva worship. Kashi Vishwanath Mandir has been destroyed and rebuilt several times throughout history. Aurangzeb, the sixth Mughal emperor who built the Gyanvapi Mosque on its site, demolished the last structure. In 1780, the Maratha ruler, Ahilya Bai Holkar of Indore, built the current structure on an adjacent site.

The kashi vishwanath temple varanasi is mentioned in the Puranas, including the Skanda Purana’s Kashi Khanda (section). The original Vishwanath temple was destroyed by Aibak’s army when he defeated the Raja of Kannauj as a commander of Mohammad Ghori in 1194 CE. During the reign of Delhi’s Sultan Iltutmish (1211–1266 CE), a Gujarati merchant rebuilt the temple. It was destroyed once more during the reigns of Hussain Shah Sharqi (1447–1458) or Sikandar Lodhi (1489–1517).During the reign of Mughal emperor Akbar, Raja Man Singh built the temple. In 1585, Raja Todar Mal rebuilt the varanasi temple on its original site with funds provided by Akbar.

Emperor Aurangzeb demolished the kashi vishwanath mandir and replaced it with the Gyanvapi Mosque in 1669 CE. The remnants of the former temple can be seen in the mosque’s foundation, columns, and at the back.

According to the Shiva Purana, once upon a time, Brahma (the Hindu God of Creation) and Vishnu (the Hindu God of Preservation) argued over who was supreme. To put them to the test, Shiva pierced the three worlds as a massive, never-ending pillar of light known as the jyotirlinga. Vishnu took the form of Varaha and sought the bottom, while Brahma took the form of a swan and flew to the top of the pillar. In his arrogance, Brahma lied and offered a katuki flower as proof that he had discovered the end. Vishnu modestly admitted that he couldn’t find the bottom.

Shiva then assumed the wrathful Bhairava form, severed Brahma’s lying fifth head, and cursed Brahma that he would not be worshiped. For all eternity, Vishnu would be worshiped as equal to Shiva, with his own temples. The jyotirlinga is an ancient axis mundi symbol that represents the supreme formless (nirguna) reality at the heart of creation, from which Shiva’s form (saguna) emerges. Thus, the jyothirlinga shrines are locations where Shiva appeared as a fiery column of light. Shiva has 64 forms, which are not to be confused with Jyotirlingas. Each of the twelve jyotirlinga sites is named after the presiding deity, who is thought to be a different manifestation of Shiva.

The primary image at all of these sites is a lingam representing the beginningless and endless Stambha pillar, symbolizing Shiva’s infinite nature. Somnath in Gujarat, Mallikarjuna in Srisailam in Andhra Pradesh, Mahakaleswar in Ujjain in Madhya Pradesh, Omkareshwar in Madhya Pradesh, Kedarnath in Himalayas, Bhimashankar in Maharashtra, Viswanath in Varanasi in Uttar Pradesh, Triambakeshwar in Maharashtra, Vaidyanath Jyotirlinga,Deogarh in Jharkhand, Nageswar in Gujarat’s Dwarka, Rameshwar in Tamil Nadu, and Grishneshwar in Maharashtra’s Aurangabad.The Manikarnika Ghat on the Ganges near the Kashi Vishwanath Temple is a Shakti Peetha, a revered place of worship for the Shaktism sect. The Daksha Yaga, a Shaivite literature, is regarded as important literature because it tells the story of the origin of Shakti Peethas.

Rangabhari Ekadashi, or the Festival of Colors, is observed on Phalgun Shukla Ekadashi. Before Holi, Baba Vishwanath is said to return to Kashi after having a cow in the form of mother Bhagwati. The echo of dozens of Damroos can be heard throughout the temple complex. This custom has been carried out for over 200 years. On Basant Panchami Baba’s Tilak, Shivaratri marriage, and Rangbhari Ekadashi mark Parvati’s departure from Shiva.For over a century, the temple’s former mahant family has upheld these traditions. These rituals of Baba’s marriage are carried out at the home of Dr. Kulpati Tiwari, the former Mahant of Shri Kashi Vishwanath Temple in Redzone. Baba Vishwanath performed the Saptarishi Aarti’s seven rituals.According to the Puranas, Kashi is loved by the Saptarishi to the priest, so the devotees of the Saptarishi Aarti perform the marriage rituals. The marriage was completed in Vedic rituals by seven archaks led by Pradhan Archak Pandit Shashibhushan Tripathi (Guddu Maharaj).

How to reach kashi vishwanath temple :

Via Rail : Varanasi city station is only about 2 kilometers from the temple, and Varanasi junction is about 6 kilometers away.

Via Air : Babatpur’s Lal Bahadur Shastri Airport is well-connected to Indian metropolises such as Delhi and Mumbai. From the Delhi airport, connecting flights are available. As a result, visitors from other Indian cities or from abroad can fly to Delhi’s domestic airport and board a flight to Varanasi. 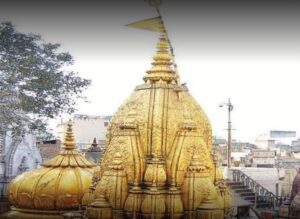 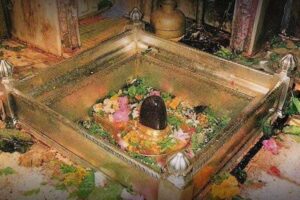