Belon Devi Mandir is located in Belon village, near the town of Narora in District Bulandshahr, Uttar Pradesh, India, and about 60 kilometers from Aligarh, the industrial city.Belon Mandir is approximately 5 kilometers from Narora town, which is located on the banks of the Ganga River and is home to one of the nation’s network of nuclear power plants operated by Neil. The village’s ancient name, Belon, is derived from Bilwan, which refers to its groves or a forest of bael trees. Belon is significant because of the presence of a goddess, “shri sarv mangala belon bhavani.” It is known that the goddess of Belon appeared from the ground. In ancient times, she arose from the body of devi ‘sati.’

Rao Bhup Singh built the temple. The precise date of the temple’s construction is unknown. The goddess Sarva Mangala Devi is said to have appeared in his dream once. Goddess commanded him to recover her idol, which was buried beneath the ground, and to build a temple in her honor. Rao Bhup Singh had forgotten the exact location where the idol was buried by the next morning. He performed Satchandi Havan on the advice of a priest. On that night, the Goddess appeared in his dream and told him where the idol was buried. The following morning, the workers began digging. They discovered the idol but were unable to remove it because the idol’s foot was untraceable.Goddess told Rao Bhup Singh that her one foot is in the netherworld and that he should build the temple here. 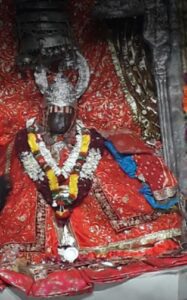 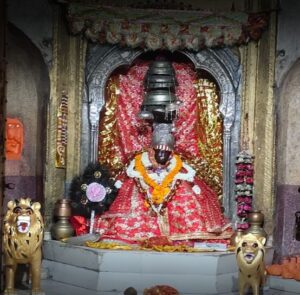