Alopi Devi Mandir is a Hindu temple in Alopibagh, Allahabad, Uttar Pradesh, India. Alopi Devi is close to the holy Sangam, or confluence, of the rivers Ganga, Yamuna, and the legendary Sarasvati. This location is close to the Kumbh Mela.

Alopi Devi Mandir is unique in that there is no statue of any deity in this temple; instead, a wooden carriage or ‘doli’ is worshiped. The name Alopi (disappeared) Bagh derives from the Hindu belief that after the death of his wife Sati, Shiva travelled through the skies with her dead body. To relieve him of his agony, Vishnu threw his Chakra at the corpse, causing various parts of the body to fall at various places in India, which were sanctified by the touch of the Goddess’ body parts and thus became holy places for pilgrimage. The final section fell at this location, which became known as “Alopi” (where disappearance was concluded) and the holiest of all. However, this claim is debatable because Allahabad has only one Shakti peeth, the Lalita Devi temple, where Sati’s fingers are said to have fallen.

Another more credible version can be found in oral history traditions told by long-term residents of the area. It dates back to when the entire region was covered in dense forests infested with the dreaded dacoits. A wedding procession happened to be passing through the forest at the time. Marriage processions were the most vulnerable targets of robbers in medieval times because they returned loaded with gold and other riches received as gifts. The wedding party was surrounded by robbers while deep in the jungle. After killing all the men and looting the wealth, the robbers moved on to the ‘doli,’ or bride’s carriage. When they unveiled the carriage, they discovered that no one was inside.The bride had vanished into thin air. The word spread, and history became legend, which then became myth. A temple was built on the site of the incident, and locals began to worship the bride as “Alopi Devi,” or the “virgin goddess who had vanished.”

Alopi Devi is still revered by thousands of people in the region, who celebrate every festival, marriage, birth, and death with their guardian deity.

Though it has always been a prominent temple in the neighborhood, its reach and following has increased significantly since the 1990s, prompting large-scale renovation of the surrounding area. 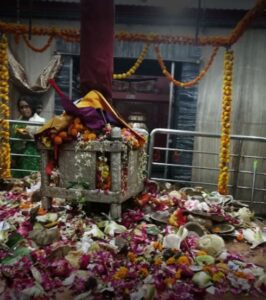 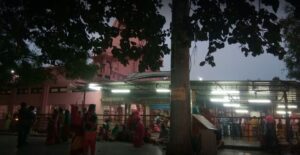