In Andhra Pradesh, the Pancharama Kshetras (or Pancharamas) are five ancient Hindu temples dedicated to Shiva. These Pancharama temples Sivalingas are made from a single Sivalinga. 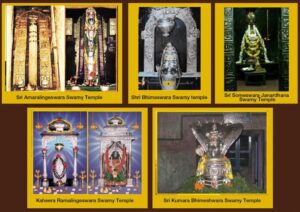 According to legend, the Rakshasa king Tarakasura owned a Shiva Lingam. Due to the strength of this Shiva Lingam, no one could beat him. Karitkeya and Tarakasura faced off in the battle between the Devas and Asuras headed by Tarakasura. Kartikeya destroyed Tarakasura with his Shakti Aayudham. Tarakasura’s body was ripped apart by the force of Shakti Aayudha. But, much to Kartikeya’s surprise, all the pieces came together to form Taraka. He repeatedly smashed the body into pieces, but the pieces still came back together.

Lord Kumara Swamy seemed to be perplexed and humiliated. “Kumara!” said Lord Sriman Narayana as he appeared in front of him. Don’t get down on yourself. You can’t kill him unless you break the asura’s Shiva Lingam ” (“You must first break the Shiva Lingam into pieces, then you can kill Taraka,” meant Lord Vishnu). He claimed that after the Shiva Lingam has split, it will attempt to reassemble. To keep the Lingam from reuniting, all of the fragments should be worshipped and temples constructed for them in the places where they fell.

Lord Kumara Swamy used his Agneyastra (fire weapon) to smash the Shiva Lingam worn by Taraka after taking Lord Vishnu’s word. The Lingam had split into five parts and was attempting to reassemble itself by performing Omkara nada (chanting Om). Surya Deva then set the parts and worshipped them by constructing temples over them, as directed by Lord Vishnu. The pieces stopped moving when temples were built, and they became known as Panchaarama Kshetras. All five Shiva Lingams in these five locations have scale-like markings on them, which are thought to have been created by Lord Kumara Swamy’s use of the Agneyastra.

According to legend, Indra, Surya, Chandra, Vishnu, and Kumara Swamy installed these five parts as Siva Lingams at five temples in their respective locations.

The amararama temple in the village of Amaravati lies on the bank of Krishna in Guntur district. The other four are in the districts of Godavari (two in east Godavari and the other two in west Godavari). The bus is good, as the temple will be accessed by all buses. Here, Lord Indra worships Amara Lingeswara swamy. The amaravati temple is old and has many temples in the compound in three circles. The goddess here is Bala Chamundeswari mata. The swami temple of Venu Gopala is also on the principal temple campus. 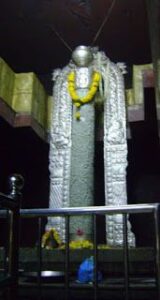 Draksharamam : The Draksharamam Bhimeswara Swamy Temple is near Ramachandrapuram. The Draksharamam Temple is enormous, with three compound circles. The Archeological Department is in charge of it. Lord Shri Rama, Lord Surya, and Lord Indra all worshiped Lord Shiva here. One of the 18 shakti peethas, Manikyamaba devi, is present here. 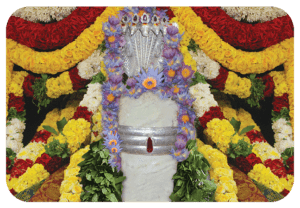 Somarama :The somarama temple bhimavaram is located in Gunupudi.The distance from the bus stop is about 3 to 4 kilometers. The Someswara temple appears to be brand new, and it features a sacred pond known as Chandra kundam. In front of the temple is Chandra kundam. By worshiping Lord Shiva here, Lord Chandra was able to atone for his sins. As a result, he is known as Someswara Swami. Shivalingam’s color changes with the lunar month (black at the time of Amavasya, white at the time of Pournami). On the second floor is the Annapurna Mata Temple.

Somarama Temple Timings: Samalkot kumara bhimeswara temple timings are from 6 am to 12 pm in the morning and from 4 pm to 8 pm in the afternoon.

Ksheerarama: The Ksheerarama Temple is in Palakollu. Lord Vishnu received Sudarshana chakra from Ksheera Rama Lingeswara swamy here. Lord Shiva bestowed boons and milk on Upamanya Maharshi, hence the name Ksheera (milk) Ramalingeswara swami. The bus stop is close to the temple. The Gopuram of the temple is very tall and can be seen from the bus stop. The goddess is Parvati.

Kumararama : The Kumararama Bhimeswara Swamy Temple is located in  Samarlkota. It’s about 20 kilometers from Kakinada and one kilometer from the Samarlakota Railway Station. It is a very old temple that is under the Archeological Department’s jurisdiction. Lord Shiva is represented by a massive Shivalinga, which can be seen from the second level. The name Kumararamam comes from Kumaraswami, who built Shiva Linga here. The goddess is Bala Tripura Sundari devi. 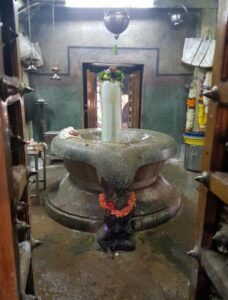