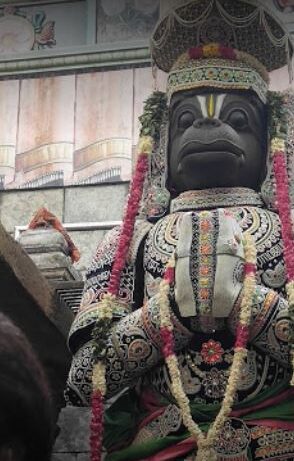 The Namakkal Anjaneyar temple is dedicated to the Hindu god Hanuman and is situated in Namakkal, a town in the Namakkal district of Tamil Nadu, India. Namakkal Hanuman Temple was designed in the Tamil architectural style. The temple’s legend is connected to Narasimha, a Hindu god Vishnu avatar who appears for Hanuman and Lakshmi. Anjaneyar’s portrait stands 18 feet (5.5 meters) tall, making it one of India’s tallest Hanuman statues. “Sri Vaikhanasam” comes after the Agamam.

The sanctum is reached via a pillared hall. The Anjaneya Temple Namakkal hosts four regular rituals and several yearly festivals, the most notable of which is the fifteen-day Panguni Uthiram festival held during the Tamil month of Panguni (March – April), during which the image of the presiding deities is paraded through the temple’s streets.

Hiranyakasipu was troubling the Devas because he had received a boon from Brahma that no human could destroy him in the morning, noon, or night, nor in the air, water, or land. Despite his father’s wishes, his son Prahlada was a devout follower of Vishnu. He even attempted to kill Prahalada several times, only to be saved by Vishnu’s divine grace. Hiranyakasipu asked if Vishnu was present everywhere during a heated argument with Prahalada, and then proceeded to break a pillar with his sword.Vishnu emerged from the pillar in the form of Narasimha. Narasimha was a human with a lion’s face who killed Hiranyakasipu in a doorway that was neither land nor air in the evening.

There was a time when Lakshmi, Vishnu’s consort, was doing penance here. Lakshmi asked Hanuman (also known as Anjaneyar) to get her a view of Vishnu in the form of Narasimha because he was carrying an image of Saligrama. Hanuman entrusted her with the saligrama and asked her to keep it safe until he returned. Before Hanuman could return, Lakshmi put the image here, which grew into a mount. Narasimha appeared in front of them both and made his home here. This legend is also linked to the Narasimhaswamy temple, which is situated in the foothills, and Hanuman is said to have worshipped him in a standing pose from a distance axial to the temple.

Festivals at Namakkal Sri Anjaneyar Temple :The temple’s main festival is the fifteen-day Panguni Uthiram festival, which takes place during the Tamil month of Panguni (March – April), during which the images of the temple’s presiding deities are paraded through the temple’s streets. In modern times, the Namakkal district administration has designated the temple as one of the district’s most important tourist attractions. People from Namakkal and the surrounding areas visit the temple. 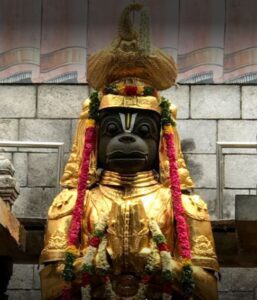 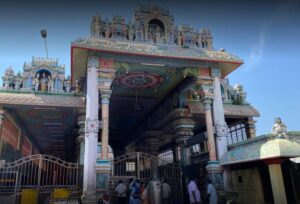 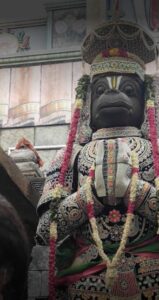