Marundeeswarar Temple is a Hindu temple dedicated to Shiva that is situated in Thiruvanmiyur, Chennai, near the Bay of Bengal beach. It is one of the 275 Paadal Petra Sthalams with no Navagraha, and it is where two of the most revered Nayanars (Saivite Saints), Appar and Tirugnana Sambandar, glorified the temple with their verses during the 7th and 8th centuries. During the 11th century, Chola kings greatly enlarged the temple.The Marundeeswarar temple has two seven-tiered gateway towers, as well as a wide tank and a total temple area of one acre. For people with illnesses, the Marundeeswarar temple has been a place of healing worship. During the Chola era, the road starting from Marundeeswarar temple Thiruvanmiyur, now known as ECR, was an important route known as Vadagaperuvazhi, connecting the kingdom to places in Thanjavur and Andhra Pradesh. Inscriptions from the 11th century, during the reign of Rajendra Chola, can be found in the shrine of Tripura Sundari Amman.The temple’s origins and antiquity are supported by inscriptions found in other temples in the area, including Kapaleeswarar Temple, Virupaksheeswarar Temple, and Thiruvidandai, all of which attest to Tiruvanmiyur’s existence. This ancient worshiping place was given a new lease on life in 1903 and again in the 1970s. The Trinity Sea Shore temples of Thondai Mandalam are made up of this temple, the Kapaleeswarar Temple, and the Thiruvottiyur Thyagarajaswamy Temple. Arulmigu Marundeeswarar Temple is famous for teaching sage Agastya about the medicinal properties of various herbs and plants. Since then, the Marundeeswarar temple has been a place of worship for people suffering from illnesses and other health issues. The sage Valmiki, who wrote the Ramayana, is said to have worshipped Shiva in the temple. Since Valmiki blessed this spot, it was given the name Thiruvalmikiyur, which is pronounced ‘Thiruvanmikiyur’ in Tamil. Over time, the name was changed to Thiruvanmiyur.In Thiruvanmiyur, there is a place called Valmiki Nagar in his honor. On the western side of the temple, on what is now known as the East Coast Path, there is also a shrine for the sage (ECR). The lingam for which Hanuman performed pooja, the lingam (Meenakshi Sundareswarar) for which Saint Bharadwaja performed pooja, and the lingam (Meenakshi Sundareswarar) for which Indra’s curse was lifted are all present. Brahma held a Shiva festival here, and Markandeyar performed a penance and prayed to Shiva. Since Kamadhenu, the holy cow, is said to have performed oblation on the Sivalingam with her milk, the presiding deity is also known as Palvannanathar. According to another legend, the Sun and Moon worship each other every day at sunset, which is why the main shrine is said to face west. 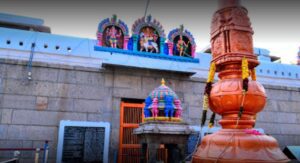 The Four Kaala Pooja are conducted according to the Kaaraa Nagama Pooja system.

The temple is thought to have some Pallava dynasty features and some Chola dynasty features. The temple has two entrances, one on East Coast Road and one on West Tank Street, both with five-tiered gopurams (gateway tower). There are three gates at the entrance from West Tank Lane, but only one at the entrance from East Coast Path. The Thiruvanmiyur Sivan temple is about 1 acre in size, with various images adorning the pillars and stucco figures adorning the gopurams.The Somaskanda form of Shiva is housed in a mandapam (hall) with 36 massive pillars adorned with carvings. Every day between 7 and 8.30 p.m., the temple’s Devasriyan mantapam hosts shaiva sidhantha lectures.

There are smaller shrines for Ganesha, Murugan, and three ganeshas who rule all three time periods, as well as a vedagama padasalai adjacent to the temple. A swayambu is a shiva linga (or a natural formation and not built like Kapaleeshwara temple at Mylapore). As a result, only pure cow’s milk is used for abhishekam. For the past 11 years, a Thirumurai mandapam has been set up in which Tirumura has been sung everyday. The idols of Shiva in his three forms, Theyagaraja, Marundeeswarar, and Nataraja, can be found in Shiva’s shrine. The final shrine is dedicated to Goddess Thirupurasundari, who is actually Goddess Parvati and is Marundeeswarar’s consort. Pamban Swamigal’s samadhi is also situated near the shrine.