Kateel Durga Parameshwari Temple is regarded as one of India’s holiest Hindu temple cities. Kateel, also known as Kateelu, is a temple town in the Dakshina Kannada district of Karnataka, India. Kateel Temple is located on the banks of the Nandini River.

The Vaivaswatha manvanthara is actually in the first quarter of the twenty-eighth recurrence of the Yuga quarter. The world is experiencing an ongoing drought. In the rivers, lakes, and wells, there isn’t a drop of water. Plants and creepers have withered, and trees have been ravaged, giving forests and gardens a desolate appearance. There was no food or water to drink. Animals, birds, and humans seem malnourished and emaciated. With heaps of corpses littering the ground, the world seems to be a veritable morgue. The groans of dying beings can be heard all over. 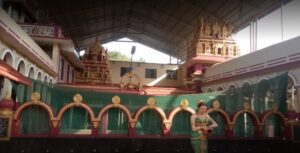 Sage Jabali was absorbed in him, deep in meditation inside a cave in a sequestered lush green forest near the Amalaka Theertha (the lake of the emblic tree). He was awoken as if by a divine will. He came out of himself and looked at the starving and thristing million. It was far too painful for that good person to stand by and do nothing. He vowed to end the drought by performing a Yajna.

But how do you perform a Yajna in a land where there is a severe water shortage? A sacrifice that necessitates the use of several materials and accessories? What is the best way to gather the required materials? The sage paused for a moment. Then, using his yogic powers, he ascended to heaven in his light body and laid the earth’s story of misery at the feet of Indra, the performer of a hundred sacrifices, pleading: “Lord, I have vowed to perform a sacrifice for the welfare of the earth and to erradicate the drought now ravaging it.” Please give Kamadhenu, the divine cow, to be the source of food for the sacrifice. But I don’t see the sacrifice materializing for her in the wasteland that the world has become.

“Oh sage, Kamadhenu has gone to Varunaloka to make a sacrifice, and I am powerless to stop him.” I’m afraid I won’t be able to submit her with you right now. Nandini, her daughter, is present. She is endowed and divinely blessed in the same way as her mother is. If she agrees, you can take her and complete the sacrifice,” Indra said, nodding his head.Sage Jabali left Indra, happy that his wish had been granted, and traveled to Nandini’s place. He approached her with folded hands and said, “Blessed mother, the world is in the grip of a scorching drought.” Hungered stomachs gulp down the flesh of dogs and jackals, while parched tongues suck the tears that fall from their eyes. There can be no crops without rain, and there can be no life without crops. According to the scriptures, sacrificial offerings consecrated with manthra render the gods happy, and they shower the earth with timely and abundant rains. As a result, I’ve vowed to conduct a Yajna in order to alleviate the world’s drought and ensure its well-being.The drought-stricken world, on the other hand, is unable to provide the Yajna with the necessary materials. You are Kamadhenu’s daughter, the granter of all wishes. “Magaminmous mother, please accompany me to the earth and bless the sacrifice with the required materials,” the sage prayed. 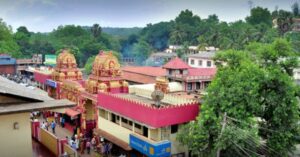 Nandini was flush with pride in every vein and swelled with the importance of being in the company of gods, having been endowed by birth with the divine power to grant every wish. Her divine gifts made her feel superior to all. Vanity poured out of her, and insolence radiated from her eyes. Impertinence had dried up the last drop of pity in her. Arrogance had blinded her. She retorted with complete flippancy and reckless abandon, oblivious to the fact that her supplicant was a great spiritual master and a seer.“Your planet is the womb of fallen villains such as Keechaka, Ravana, and Karthaveerya. It is a den of greed and a haven for evil. “I’ll never step foot there.” The sage’s pitiful prayer was thus ignored by Nandini with impunity.

Jabali was in excruciating pain. “The blessed earth on which Lord Narayana successively incarnated, holy souls performed miraculous acts, great master’s unrivaled heroes moved and moved human souls and rewrote man’s destiny, the most hallowed place in all existence thus shunned and dismissed!” What a shame that I should have to hear the land of my birth condemned in this manner!” The sage begged her once more, his sorrow overflowing and his rage overpowering him but somehow controlling him. 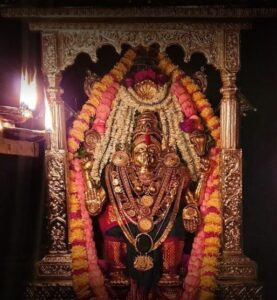 “Holy mother, where the lake is, mire would be. Wherever man is, evil will be. Human habitation would be covered by filth. That’s something worth investing in. Men, however, are not the only ones who sin. The great gods, too, have sinned! And men haven’t done something that the gods haven’t done. Wasn’t Indra cursed with eyes all over his body because of his love for Ahalya? Wasn’t Rama born on the same planet where Ravana stalked and exacted his vengeance? And don’t be so cruel to the hungry and suffering people of the world. Refrain and accompany me to the planet to make the sacrifice easier. Be gentle with the mortals.

But, alas, all the warmth of concern and distress could not soften Nandini’s hardened heart. “Sage, don’t push me any more in vain,” she replied without batting an eye. I won’t budge an inch from here to get down to your abode of sinners, even if Lord Shiva himself comes to enjoin. Enable them to pay the price for their transgressions.”

Jabali, despite being the master of himself, had lost his influence. He’d hit the limit of his patience. His heart hardens into stone, softer than a flower. He was a blaze of fury from head to foot. “You have condemned the world, the holy land of redeeming rivers like the Ganga,” his blistering tongue yelled.

Via Air: Mangalore International Airport is only 10 kilometers away from the Temple.

Via Bus: By road, the distance from Mangalore to Bajpe to Kateel is 26 kilometers. 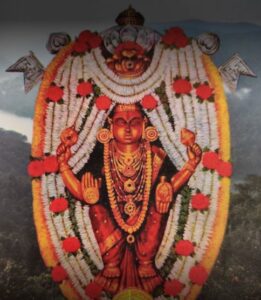 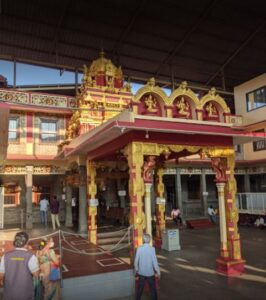 Other Famous Temples in Karnataka :