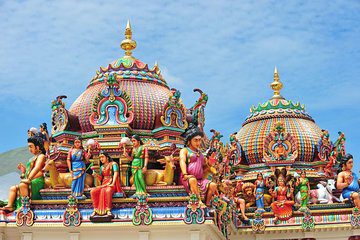 The Kapaleeshwarar Temple is a Hindu shrine dedicated to Lord Shiva in Mylapore, Chennai, Tamil Nadu, India. Karpagambal is the Tamil name for Shiva’s consort Parvati, who is worshipped at this temple (“Goddess of the Wish-Yielding Tree”). The Kapaleeshwarar Temple Mylapore was constructed around the year 700 CE and is a fine example of Dravidian architecture. 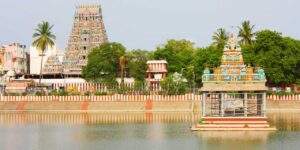 According to the Puranas, Shakti worshipped Shiva in the form of a peacock, giving the region that grew up around the Kapaleeshwarar temple the name Mylai (Mayili) – mayil is Tamil for “peacock.” The lingam is used to worship Shiva, who is known as Kapaleeswarar. Karpagambal is the name of his consort Parvati. The Tevaram, a 7th century Tamil Saiva canonical work written by Tamil saint poets known as the Nayanars and graded as Paadal Petra Sthalam, reveres the presiding deity.

The name of the temple is derived from the words kapla (head) and vara, Lord Shiva’s alias. According to the Puranas, when Brahma and Shiva met on the summit of Mount Kailash, Brahma refused to show Shiva the respect he deserved. As a result, Shiva snatched one of Brahma’s heads (kapalams). Brahma came down to Mylapore as penance and built a Lingam to please Shiva. Sukra Puri, Veda Puri, and a variety of other names are given to this place, including “Kailaye Mayilai and Mayilaye Kayilai,” which means “similar to Kailash.” Due to a curse, Goddess Karpagambal, a kind of Shiva’s consort Parvati, became a pea-hen and performed penance here to reclaim her original identity. Murugan, Shiva’s son, received the spear (Sakthi Vel) from Parvati for slaying a demon here. Brahma had come to worship here in order to rid himself of his ego and reclaim his creative strength. Here, the four Vedas were worshipped. Sukracharya came here to worship the Lord and regained his missing eye.Rama worshipped here after beating Ravana and taking Sita back from Lanka. The daughter of Sivanesa Chettiar, Angam Poompavai, was killed by a snake bite and was later resurrected here by Thirugnana Sambandar’s forces. Vayilar Nayanar, a saiva saint, attained salvation here, and Thiruvalluvar, the creator of the Thirukkural, was born in Mylapore. The beautiful Madaveedhi is referred to as “Malgun Mathri Thavazhum Maada Veedhi Mylappil Ullar” in Thevaram. Thiruganana Sambandar and Arunagirinathar have sung Karpagambal’s Singara Velar’s glory.Thiruganana Sambandar and Arunagirinathar have sung Karpagambal’s Singaravelar glory. The 10-day festival, which takes place in March/April, is a sight to behold, and the Arubathu Moovar festival attracts thousands of devotees each year. 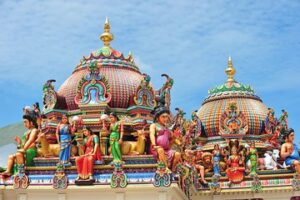 The ruling Pallavas founded the temple in the 7th century CE, according to popular belief. This viewpoint is supported by references to the temple in Nayanar hymns (which, however, place it by a sea shore). Thirugnanasambandar’s 6th song in Poompavaipathikam and Arunagirinathar’s 697th song in Thirumylai Thirupugazh both mention the Kapaleeswarar temple being near the sea. Within the temple, there are inscriptions dating back to the 12th century. The temple’s 120-foot gopuram (gateway tower) was constructed in 1906 and features stucco figures. The Hindu Religious and Endowment Board of the Tamil Nadu government maintains and administers the temple.

The Kapaleeshwarar temple is built in the traditional Dravidian architecture, with the gopuram towering over the street on which it stands. This temple also serves as a testament to the sthapathis of the Vishwakarmas. On either side of the gopuram, there are two entrances to the temple. The east gopuram is about 40 meters tall, while the western gopuram, which is smaller, faces the sacred tank.

The lion, Adhikaranandi, horse, bandicoot, peacock, donkey, and parrot are among the vahanas (Sanskrit for “vehicles”) at the temple, while a golden chariot is a recent addition. The god and goddess statues are seated on a vahana, or chariot, which is carried around the temple in a procession while the temple band plays music. Devotees congregate around the vahanas, finding it a privilege to pull / raise the God and Goddess. Within the temple, there is also a peacock and a peahen caged to represent the legend that Karpagambal came in the form of a peahen to plead with Kapaleeshwarar.

There are six poojas everyday at the temple. 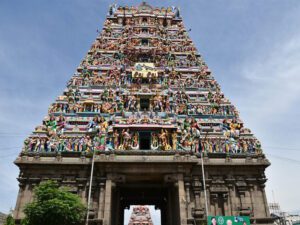