Kailasanathar Temple Kanchipuram in Kanchipuram’s oldest building. It is a Hindu temple in the Tamil architectural style that is situated in Tamil Nadu, India. Kanchi Kailasanathar Temple is renowned for its historical significance and is dedicated to Lord Shiva. A Rajasimha (Narasimhavarman II) ruler of the Pallava Dynasty constructed the temple between 685-705 AD. The carvings on the low-slung sandstone compound include several half-animal deities, which were common during the early Pallava architectural era.The structure houses 58 small shrines devoted to Shiva in different ways. These are installed into niches on the inner face of the circumambulatory passage’s high compound wall. The kailashnath temple kanchipuram is one of the city’s most popular tourist attractions.

The structure houses 58 small shrines devoted to Shiva in different ways. These are installed into niches on the inner face of the circumambulatory passage’s high compound wall. The Kailasanathar temple is one of the city’s most popular tourist attractions.

The Pallava dynasty built the temple after establishing their kingdom with Kanchipuram (also known as “Kanchi” or “Shiva Vishnu Kanchi”) as the capital city, which is considered one of Hinduism’s seven holiest cities. After Emperor Narasimhavarman I extended the Pallavas’ territories to the north, west, and south within Tamil, Andhra, and Kannada territories, they began expanding Kanchipuram, their capital city, and constructed many magnificent temples. The Tiru Parameswara Vinnagaram, also known as the Vaikunta Perumal temple and the Kailasanathar Temple., is one of two rare examples of temple architecture from the period 640-730 AD. 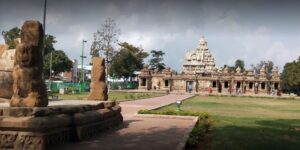 The kailashnath temple kanchi was constructed between the years of 685-705 AD. Narasimhavarman II (Rajasimha), also known as Rajasimha Pallaveswaram, constructed the first structural temple in South India. Mahendravarman III, his son, finished the front façade and the gopuram (tower). Prior temples, such as those in Mahabalipuram, were either made of wood or hewn into rock faces in caves or on boulders. The kanchipuram kailasanathar temple became a model for similar temples in South India.According to local tradition, the temple acted as a safe haven for the kingdom’s rulers during wartime. The kings constructed a secret tunnel that was used as an escape route and is still visible today. Raja Raja Chola I (985–1014 CE) is said to have visited the temple and taken inspiration from it when he built the Brihadeeswara Temple.

The kailasanathar temple timings are :

Kailasanathar Temple Kanchipuram Architecture :
The structure has a simplistic layout, with a tower or vimana in the middle. The vimana of the temple is square in plan and rises in a pyramidal form above the main shrine (sanctum sanctorum). Many levels rise proportionately in the tower. A small dome-shaped roof can be found at the top of this tower. Pallava type pillar elements with mythical animal forms (lions on the base) are decorative elements. The gopuram walls are plastered at the entrance. Eight small shrines and a gopura, which serves as a precursor to the main gopura, can be found on the entrance wall. The mandapa and the sanctuary were later linked by an intermediate hall known as the ardhamantapa, which is said to have detracted from the temple’s beauty. The temple is surrounded by walls in a rectangular shape.

The sculpture on the south facing wall portrays Shiva as Umamaheshavara (Shiva with his consort Parvati) with Lingodbhava (emergence of Shiva as fiery pillar – linga) on the lower level, surrounded by Brahma and Vishnu and flying amaras.

The west-facing hall contains sculptures of Shiva in the forms of Sandhya Tandavamurti and Urdhava Tandavamurti, as well as portraits of Brahma, Vishnu, Nandi, and Parvati.

This kailasanatha temple at kanchi hosts a number of festivals during the year. One of the festivals is “Maha Shivaratri.” Ganesha Chaturthi, Deepavali, Tamil New Year, and Rama Navami are some of the most important Hindu festivals. The festival of “Navratri” is observed with great respect for nearly nine days.

How to reach Kanchipuram Kailasanathar Temple ?

Via Air :Chennai, which is an international airport, is the closest airport to this temple. The temple is about 80 kilometers from the airport.

Via Rail : This temple is near to the Kanchipuram Railway Station. A bus or a taxi may be used to get to an auto.

Via Bus : Kanchipuram is well connected to the majority of cities. Local transportation is plentiful. The bus stop is within walking distance of the temple complex. 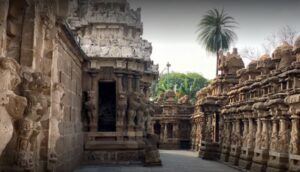 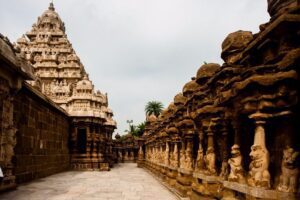