Ekambareswarar Temple (Ekambaranathar Temple) is a Hindu temple in Kanchipuram, Tamil Nadu, India, dedicated to the deity Shiva. Kanchipuram Ekambareswarar Temple is significant to the Hindu sect of Saivism as one of the Pancha Bhoota Stalas temples associated with the five elements, especially the element of earth, or Prithvi. Shiva is known as Ekambareswarar or Ekambaranathar and is symbolized by a lingam, with his idol known as Prithvi lingam. Elavarkuzhali is the name of his consort Parvati.The Tevaram, a 7th century Tamil Saiva canonical work written by Tamil saint poets identified as nayanars and graded as Paadal Petra Sthalam, reveres the presiding deity. Nilathingal Thundam Perumal temple, a Divyadesam, one of the 108 temples revered in the Vaishnava canon Nalayira Divya Prabhandam, is also housed in the temple. 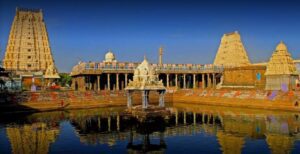 This Ekambaranathar Temple is one of India’s oldest, having been in use since at least 600 AD. Kama kottam and Kumara kottam are mentioned in Tamil poetry from the second century AD (currently the Kamakashi Amman temple and the Subramanya temple). The temple is mentioned in Manimegalai and Perumpāṇāṟṟuppaṭai., both from the 300 BCE Tamil Sangam literature. Pallavas were the first to build the temple.At the temple, the Vedantist Kachiyapper served as a priest. The later Chola Kings demolished the original building and restored it. With the assistance of local rulers, Adi Sankara, a 10th-century saint, had Kanchipuram remodeled, as well as the expansion of this temple, Kamakshi Amman Temple, and Varadaraja Perumal Temple.

Achutaraya gifted a number of villages, according to inscriptions dating from 1532 CE (record 544 of 1919). The royal order was broken by Vira Narasingaraya Saluva Nayaka, who was guided by Achutaraya, who gave more lands to Ekambaranathar temple than to Varadaraja Swamy temple, despite the instruction of an equal gift to both temples. Hearing this, Achutaraya split the lands evenly between the two temples. 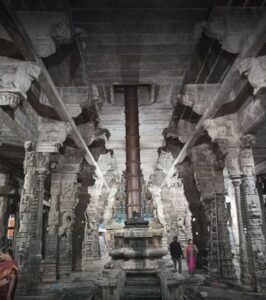 During the 15th century, the Vijayanagar kings made significant contributions to the temple, which Vallal later built. Pachiyappa Mudaliar used to travel from Chennai to Kanchipuram on a regular basis to worship in this temple, and he lavished money on its renovation during the British rule. Pachiyappa Mudaliar sitting on horseback can be seen in the temple pillar. Pachiappa Mudaliar later built a similar temple in Chennai with the same name as Ekambareswarar in order to save time traveling to Kanchipuram. The temple was extensively renovated by Nattukottai Chettiars, according to an Archaeological Survey of India report from 1905–06.

According to legend, Parvati, Shiva’s consort, once wished to atone for her sins by offering penance under the temple’s ancient Mango tree near the Vegavathi river. Shiva used fire to put her loyalty to the test. Goddess Parvati sought assistance from her brother, Vishnu. To save her, he removed the Moon from Shiva’s head and displayed the rays, which cooled the tree and Parvati. Parvati’s penance was once again disrupted when Shiva sent the river Ganga (Ganges). Parvati made a plea to Ganga and persuaded her that they were sisters and should not hurt each other. As a result, Ganga did not interfere with Parvati’s penance, and Parvati formed a Shiva Linga out of sand to merge with Shiva. Ekambareswarar, or “Lord of Mango Tree,” was the name given to the God who lived here.

According to another legend, Parvati worshipped Shiva under a mango tree in the shape of a Prithivi Lingam (or a Lingam improvised out of sand). According to legend, the nearby Vegavati river overflowed and threatened to swallow the Shiva Lingam, prompting Parvati or Kamakshi to accept it. Shiva was moved by the gesture, which manifested in person, and he married her. He is referred to as Tazhuva kuzhainthaar (“He who melted in Her embrace”) in Tamil in this sense.Tirukuripputhonda Tirukuripputhonda Tirukuripputhonda Nayanar, one of the 63 saivite saints known as nayanars, was a washerman who washed the clothes of all the Saivities near the temple. God Shiva, dressed as an elderly brahmin, duped him and ordered him to wash before dawn. Shiva produced a cloudy evening at the same time. The washerman slapped his head against a stone in disgust as the evening approached. God manifested himself in his true form and bestowed blessings on his devotee.

The lingam and Shiva’s image are held in the sanctum sanctorum. Around the first precinct, there are granite pictures of the 63 Nayanmars. The innermost precinct of the temple is festooned with Shivalingams, one of which is a Sahasra Lingam with 1,008 Siva lingams sculpted on it. As with all other Shiva temples in Kanchipuram, there is no separate shrine for Parvati inside the complex. According to local legend, Kamakshi Amman Temple is Ekambaranathar’s consort. A plaque depicting Shiva Parvathi is located behind the image of Lingam in the sanctum, with Shiva depicted as Tazhuva kuzhainthaar and Parvathi as Elavar Kuzhali.

Inside the temple complex, there is a small shrine dedicated to Vishnu called Nilathingal Thundam Perumal temple. The shrine is hailed by the Alvar saints as one of the 108 Divya Desams, and Vishnu is prayed as Vamana Murthy. On the second precinct, there is a separate shrine for Nataraja.The sthala-virutcham, or temple tree, is a 3,500-year-old mango tree with four branches that are said to grow four different types of mangoes.

Significance of the Kanchipuram Shiva Temple :

Pancha Bhoota Stalam refers to the five Shiva temples, each of which represents one of nature’s five primary elements: ground, water, air, sky, and fire. Pancha denotes five, Bhoota denotes components, and Stala denotes place. All of these temples can be found in South India, with four in Tamil Nadu and one in Andhra Pradesh. The five elements are said to be enshrined in the five lingams, and each of the lingams in the temple representing Shiva has five different names depending on the elements they represent. Shiva is said to have manifested himself in the temple as the Prithvi Lingam. Appu Lingam (representing water) at Jambukeswarar Temple in Thiruvanaikaval, Akaya Lingam (representing sky) at Thillai Nataraja Temple in Chidambaram, Agni Lingam (representing fire) at Annamalaiyar Temple, and Vayu Lingam (representing air) at Srikalahasti Temple are the other four manifestations.

The Ekambareswarar Temple Kanchipuram Timings are :

How to reach kanchipuram ekambareswarar temple :

Via Air : Chennai International Airport is the closest airport. When you arrive in Chennai, take a taxi or a government bus to Kanchipuram, which is 64 kilometers away.

Via Rail : Kanchipuram Railway Station is the closest station. Trains passing through Kanchipuram can be boarded from anywhere in the world. Taking an auto-rickshaw or taxi to the temple after arriving in Kanchipuram. 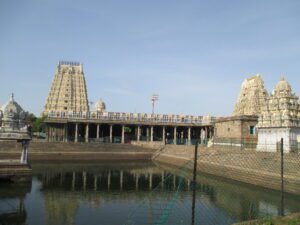 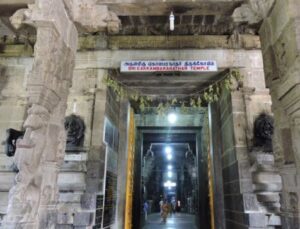