Arunachalam Temple (also known as Annamalaiyar Temple) is a Hindu temple dedicated to the deity Shiva in Thiruvannamalai, Tamil Nadu, India. Arunachalesvara Temple is situated at the base of Arunachala hill in the town of Thiruvannamalai. It is significant to the Hindu sect of Saivism as one of the Pancha Bhoota Sthalas temples associated with the five elements, especially the element of fire, or Agni. Shiva is known as Arunachalesvara or Annamalaiyar and is worshipped as Arunachalesvara or Annamalaiyar. He is portrayed by the lingam, and his idol is known as Agni lingam. Unnamalai Amman is the name of his consort Parvati.

Parvati, Shiva’s wife, once playfully closed her husband’s eyes in a flower garden at their abode atop Mount Kailash, according to Hindu mythology. While it was only for a brief moment for the gods, the universe’s light was stripped away, and the world was plunged into darkness for years. Parvati, along with other Shiva devotees, performed penance. Then, at the top of the Annamalai hills, her husband appeared as a column of fire, bringing light back to the earth.After that, he merged with Parvati to become Ardhanarishvara, Shiva’s half-female, half-male form. The Arunachala, or red mountain, is located behind the Arunachalesvara temple and is connected to its namesake temple. The hill is sacred and is regarded as a lingam, or symbolic image of Shiva. 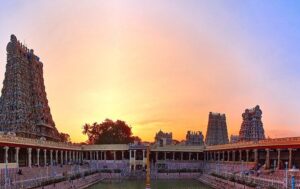 According to another legend, Shiva appeared as a flame and challenged Vishnu and Brahma to find his source while they were fighting for supremacy. Brahma assumed the form of a swan and soared into the sky to see the top of the flame, while Vishnu assumed the form of the boar Varaha and went in search of the flame’s center. The scene is known as lingothbava and is depicted on the western wall of most Shiva temples’ sanctums. Both Brahma and Vishnu were unable to locate the source, and although Vishnu admitted defeat, Brahma lied and claimed to have discovered the pinnacle. As a punishment, Shiva decreed that Brahma would never have temples built in his honor on Earth. 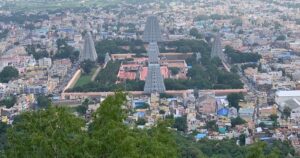 In comparison to the inscriptions of the same rulers in other temples such as Tirupathi, the Vijayanagara kings’ inscriptions in the temple suggest a focus on administrative matters and local concerns. Land endowments account for the bulk of the inscriptions, followed by commodities, cash endowments, pigs, and oil for lighting lamps. During the Vijayanagara Empire, the town of Tiruvannamalai served as a strategic crossroads, linking sacred pilgrimage sites and military routes. Inscriptions from the precolonial era depict the region as an urban center, with the city growing up around the temple.

In this well-known temple, poojas are performed six times a day. Furthermore, special poojas to be held in Lord Shiva’s Temple are performed on a daily basis. 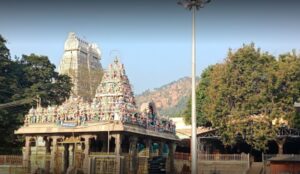 How to reach Arunachalam Temple :

Via Bus : Many buses run between Chennai and all of Tamil Nadu’s major cities and towns. Buses run from Bangalore and Tirupathi as well.

Via Rail : Tiruvannamalai is the closest railway station to Arunachalam Temple. It’s about 10 kilometers from the temple.

Via Air : The nearest airport is Chennai, which is about 185 kilometers away by road.

Arunachalam Temple Accommodation : There are many ashrams and charitable endowments that provide free or low-cost accommodation. In recent years, modern lodging options have become available near Arunachalam Temple. If you intend on traveling during festivals or weekends, you can book your hotel ahead of time. 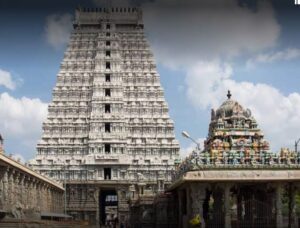 What are the Arunachalam Nearest Temples ? 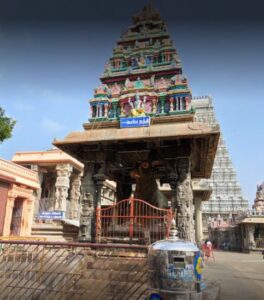 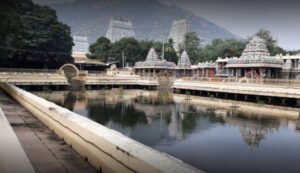