Kulpakji Jain Temple at the village of Kolanupaka in Aler Region, Yadadri district, Telangana, India, Kulpakji is also Kolanupaka Temple, a 2,000-year-old Jain temple. The kulpakji tirth houses three idols: one each of Lord Rishabhanatha, Lord Neminatha, and Lord Mahavira. Historically, the portrait of Lord Rishabhanatha, carved from a green stone, was known as ‘Manikyaswami.’ On Hyderabad-Warangal Highway NH 163, the Kulpakji Jain Temple  is about 80 km from Hyderabad. It is also referred to as jivitswamii.

The kulpakji tirth is more than 2,000 years old. In Kulpakji, a number of Jain antiquities have been identified. During the Rule of Sand Karagana (9th century), a grant mentioning a gift to a basadi was discovered at Akunur. Kolanupaka flourished during the Rashtrakutas period as a Jain centre.

More than 20 Jain inscriptions have been found in Kulpak. Inscriptions show that Kranur Gana of Mula Sangh was a major centre of the Kulpak. A manastambha has been identified with an inscription dated 1125 AD. Meghachandra Siddhanta Deva, who entered Sallekhana, is mentioned in a 12th-century inscription found in the Kulpakji Jain Temple.

The parts of Kulyapak Rishabhadeva Stuti and Kollapakamanikya Deva Tirtha Kalpa in Vividha Tirtha Kalpa (14th century) of Jeena Prabha Suri. He mentions that the Manikya Sami image was originally adored by Mandodari, Ravana ‘s wife, according to legends. It was brought here by the ruler of Kalyana, Sankar.

The main kulpakji Jain Temple, according to some legends, is said to have been built by Bharat Chakravarti. Before the 4th century, Jainism was widespread in Andhra Pradesh, and Kolanupaka was one of the early Jainism ‘s prominent centres. The temple was recently renovated with the employment of more than 150 Rajasthan and Gujarat artisans.

Red sandstone and white marble make up the interior of the kulpakji Tirth. The first Tirthankar in Jainism was Lord Rishabha, popularly called Adinath Bhagvan. The original idol of Lord Adinath, known locally as Manikya Deva, is believed to have made Kolanupaka his home.

On both sides of the main Kulpakji Jain Temple, there are eight other Tirthankar idols. The statue of Lord Mahaveer is 130 centimetres (51 in) tall and a single piece of jade is said to be made of it. On either side of the main kulpakji jain mandir kolanupaka, idols of Lord Simandar Swami and Mata Padmavati are installed.

Rooms in this Dharamshala:

Timings and Rules for Bhojanshala: 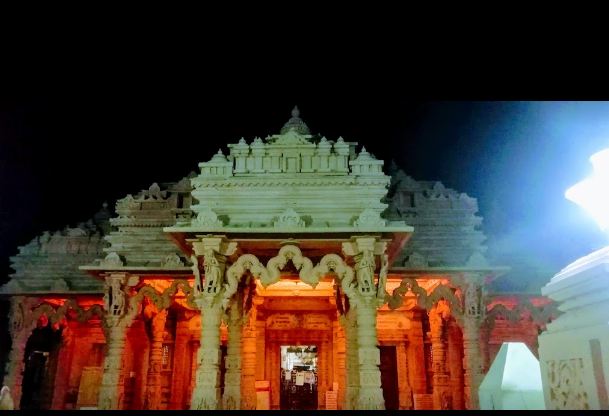