Eluru Buddha Park is situated in Eluru City With middle of Eluru Buddha Statue, West Godavari District Andhra pradesh.Gaja Vallivari Cheruvu is one of the old ponds in the history of the town of Helapuri (ancient name of the town of Eluru). Elephants used to drink water in this pond during the Chalukyan era.

The entire area of the pond has been filled with garbage for the last 2 decades and it was used as a dumping yard in the heart of Eluru city, creating the most unhygienic conditions for people.

The intention was to restore the Chalukyan pond ‘s past glory and attempts were made to clean up the entire dumping field. After that had been done, the idea came to erect a statue of the Buddha which then grew into a Buddha Park.

The Abhaya Buddha Statue ( Eluru Buddha Statue) is located in Eluru, in the Andhra pradesh district of West Godavari.A magnificent Buddha statue of 74 feet was installed in the middle of the pond called Gajjalavari Cheruvu and a painting gallery was also created to spread the teachings of the Buddha. The pedestal is adorned with famous Amaravati sculptures along the foot bridge railings up to the Statue. Eluru Buddha Statue was opened by Nallari Kiran Kumar Reddy who served as Unified Andhra Pradesh’s Last Chief Minister. 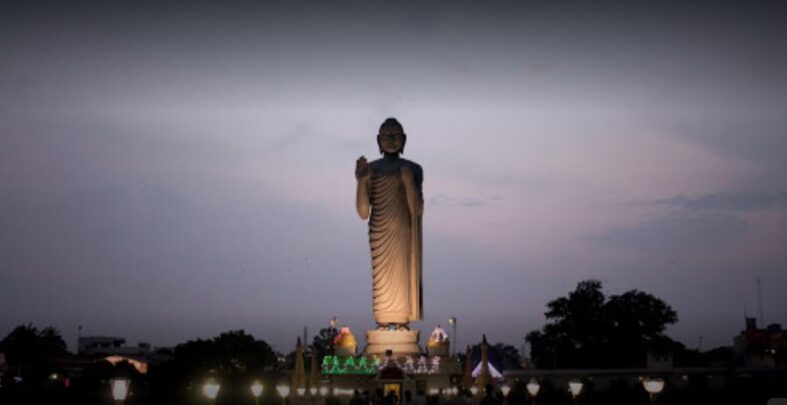