The Bhoo Varahaswamy Temple Kallahalli consists of two parts, the sanctuary and the front hall. At the entrance, there are two wide wooden doors. The awe-inspiring god is inside the sanctuary. The Pralaya Varahaswamy is in a sitting pose with the goddess Bhoodevi lying on her left knee.

The village of Kalhalli is situated on the Bangalore-Mysore highway. The village is 32 km away from Pandupura, in the Mandya district. The closest bus stop is 2 km from the village.

This Bhoo Varahaswamy Temple is said to be over 2,500 years old. This region is said to be a ‘punyakshetra’ or a sacred area where the great sage Gautam performed penance. It was the maharishi who worshiped the saligram here.Many years later, according to legend, King Veera Ballala was lost in these forests during one of his hunting trips. When he relaxed under the shade of a large tree, he saw a hunting dog chasing a rabbit. When they approached a particular spot, the rabbit turned back and began chasing the vicious dog.

Noting this unusual turn of events, the King was persuaded of some invisible forces in that area. He explored the entire area and found the god of Pralaya Varahaswamy concealed under the layers of the earth. The King then set it up in the Bhoo Varahaswamy Temple and offered daily prayers.

The Bhoo Varahaswamy Temple we see today is the remains of what the King had built. It’s had extreme floods and stood to say the tale. Also today, right in front of the temple, there is a stone slab with Devanagari inscriptions on it, telling us the story of the site. 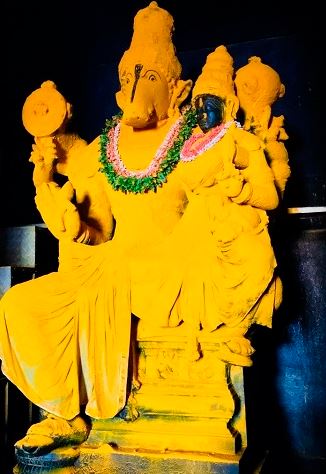