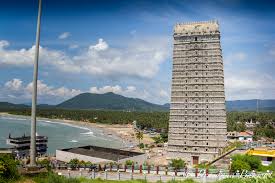 Murudeshwar Temple in Murdeshwar is a town in Karnataka, India, in Bhatkala Taluk, Uttara Kannada district. The murudeshwar temple located at 13 km from Bhatkala’s taluk headquarters. Murudeshwar shiva statue is known for the second-highest Shiva statue in the world and is situated on the coast of the Arabian Sea. Murdeshwar has a railway station on the Mangaluru-Mumbai Konkan railway line. Behind the Murdeshwar temple complex is a fort that dates back to the Vijayanagara Kings period.

Through worshiping a sacred Linga called the Atma-Linga, the Hindu gods achieved immortality and invincibility. Through possessing the Atma-Linga (Soul of Shiva), the Lanka King Ravana wanted to achieve immortality. Ravana worshipped Shiva with devotion since the Atma-Linga belonged to Sri Maheshwara. Sri Mahadeva appeared before him, pleased with his prayers, and asked him what he wanted.

The Atma-Linga was asked by Ravana. Sri Rudra agreed to give him the blessing that it should never be put on the ground until he reaches Lanka. It would be impossible to move it if the Atma-Linga was ever set on the surface. Ravana, having obtained his blessing, began his journey back to Lanka. Sri Mahadeva appeared before him, pleased with his prayers, and asked him what he wanted.

Lord Vishnu, who knew about this event, realized that Ravana could gain immortality with the Atma-Linga and wreak havoc on earth. He addressed Sri Ganesha and told him not to enter Lanka by the Atma-Linga. Sri Skandapurvaja knew that Ravana was a very devoted man who never failed to perform prayer rituals every evening. He decided to take advantage of this reality and developed a plan to confiscate Ravana’s Atma-Linga.

When Ravana was approaching Gokarna, to give the appearance of dusk, Sri Mahavishnu blotted out the light. Ravana had to perform his evening rituals now, but he was worried that he would not be able to do his rituals with the Atma-Linga in his hands. At this time, he was accosted by Sri Shashivarnam in a Brahmin boy’s disguise. Ravana told him to keep the Atma-Linga before he did his rituals and begged him not to place it on the floor. Sri Vinayaka made a deal with him that he’d call Ravana three times, and if Ravana didn’t come back in that time, he’d put the Atma-Linga on the floor.

Ravana returned to find the Atma-Linga had already been put on the ground by Sri Chaturbhuja. So Sri Keshava removed his delusion and it was again daylight. Ravana, realizing he was tricked, tried to eradicate the linga and destroy it. Several bits are scattered because of the force exerted by Ravana. One such part is said to have fallen from the linga’s head in Surathkal today. It is said that the famous temple of Sadashiva is built around that piece of linga. Then he decided to destroy the Atma-Linga cover and threw the case covering it to a location 37 kilometers away called Sajjeshwar. Then he threw the case’s lid to a place 16-19 kilometers away called Guneshwar (now Gunavanthe) and Dhareshwar. Finally, at a place called Mrideshwar in Kanduka-Giri (Kanduka Hill), he threw the cloth covering the Atma-Linga. It was renamed Mrideshwar to Murdeshwar.

This Murudeshwar Shiva Temple is situated on Kanduka Hill, surrounded by the waters of the Arabian Sea on three sides. It is dedicated to Sri Lokankara, and at the temple is built a 20-story murudeshwara gopura. The murudeshwar shiva temple authorities have constructed a lift from the top of the Raja gopura, which offers a breathtaking view of the 123-feet Sri Shiva idol. Also at the bottom of the hill there is a Rameshwara linga where devotees can do seva themselves. A temple of Shaneswar was built next to Sri Akshayaguna’s idol. The steps leading to it are two life-size elephants in concrete stand guard. The whole temple and temple complex, including the 237.5-foot-tall Raja Gopura, is one of the highest, was built by businessman and philanthropist R. to its present form. 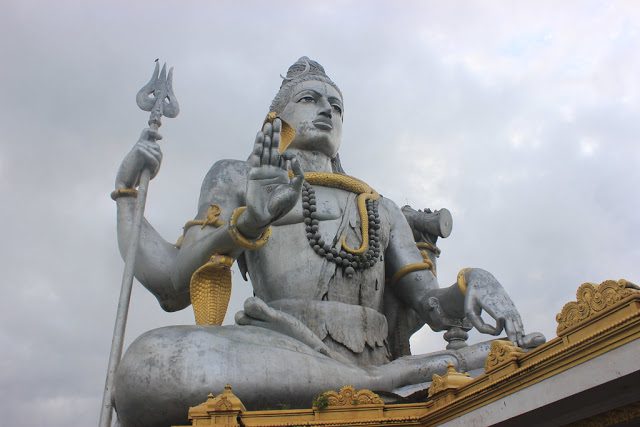