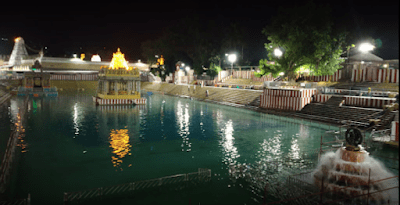 Sri Varahaswamy Temple or Bhu Varahaswamy Temple is a Hindu-Vaishnavite temple located in the hill town of Tirumala in Tirupati, Andhra Pradesh State’s Chittoor District, India. The Temple is devoted to Lord Varaha, Vishnu’s Dasavatharam’s third incarnation. The temple is located on Venkateswara Temple’s southern premises, Tirumala, on Swami Pushkarini’s northwestern corner. It is thought that this temple is older than the Shrine of Venkateswara.

According to legend, Lord Varaha remained on this mountain on Swami Pushkarini’s northern bank after saving the Earth from Hiranyaksha. Hence Tirumala Hills is also referred to as Adivarahakshetra. Lord Varaha gave territory to Lord Venkateswara upon his request during the start of Kaliyuga. As gratitude, before being offered to him, Lord Venkateswara provided Varahaswamy first bell, puja, and Naivedyam. Even today this is being pursued as a tradition. Pedda Tirumalacharya refurbished this temple in 1535 AD.
Before giving to Lord Venkateswara, Naivedyam will be provided to Lord Varaha based on the legend. And devotees must also have Lord Varaha darshan in front of Lord Venkateswara. The pilgrimage to Tirupati is not supposed to be full without Varahaswamy’s darshan