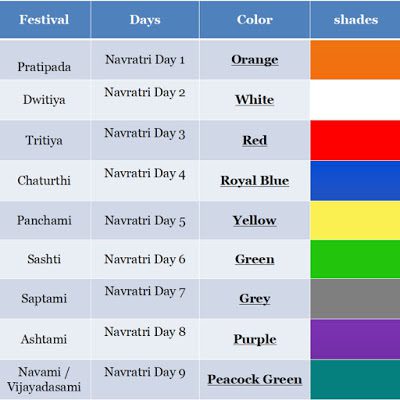 This day is associated with Shailaputri (literally “Mountain Daughter”), a Parvati incarnation, known as Pratipada. It is in this form that the Goddess is worshiped as the consort of Shiva; she is depicted as riding the bull, Nandi, with a trishula in her right hand and lotus in her left. Shailaputri is regarded as Mahakali’s direct incarnation. The day’s color is red, showing action and vigor.

On Dwitiya, Goddess Brahmacharini, another incarnation of Parvati, is worshiped. Parvati became Sati in this form, her unmarried self. Brahmacharini is worshiped for emancipation or moksha and endowment of peace and prosperity. Depicted as walking bare feet and holding a japamala and kamandal in her hands, she symbolizes bliss and calm. Blue is the colour code of this day.

Tritiya commemorates Chandraghanta’s worship – the name derived from Parvati’s half-chandra (lit. moon) front after marrying Shiva. She is the embodiment of beauty and symbolizes courage as well. Yellow is the third day colour, a vivid color that can pep up the mood of everybody.

Chaturthi worships Goddess Kushmanda. Believed to be the universe’s creative power, Kushmanda associated with the earth’s vegetation endowment and hence the day’s color is Green. She is portrayed as having eight arms and sitting on a tiger.

Skandamata is Skanda’s (or Kartikeya’s) mother, the goddess worshiped on Panchami. Grey’s colour is symbolic of a mother’s transforming strength when her child faces danger. She’s shown riding a ferocious lion with four arms and holding her baby.

Born to a sage, Katyayana, she is Durga’s incarnation and shows courage symbolized by the Orange colour. Known as the warrior goddess, she is regarded as one of Goddess Parvati’s most violent forms. Kātyāyanī is riding a lion in this avatar and has four hands.

Considered Goddess Durga’s most ferocious form, on Saptami Kalaratri is revered. Parvati is thought to have removed her fair skin to kill the Sumbha and Nisumbha demons. The day’s colour is white. The goddess appears on Saptami in a white attire with a lot of rage in her fiery eyes, her skin becomes black. The white color depicts prayer and peace, ensuring that devotees are protected from harm by the Goddess.

Mahagauri is a symbol of peace and intelligence. Pink, which depicts optimism, is the color associated with this day.

People are praying to Siddhidhatri on the last day of the festival also known as Navami. Sitting on a lotus, she is thought to possess all kinds of Siddhis and bestows them. She’s got four hands here. Also known as Devi’s Saraswati. The day’s light blue colour depicts admiration for the beauty of nature.