Mansa Devi Temple, Haridwar is a Hindu temple dedicated to goddess Mansa Devi in Haridwar’s holy city in India’s Uttarakhand state. The temple stands on top of the Bilwa Parvat on the Shivalik Hills, the Himalayan’s southernmost mountain chain. The temple also referred to as Bilwa Tirth, is one of Haridwar’s Panch Tirth (Five Pilgrimages).

The Mansa Devi Mandir is considered to be Mansa Devi’s holy abode, a Shakti form, and it is said to have emerged from Lord Shiva’s mind.Mansa is considered the Nāga (serpent) Vasuki’s sister.She is also thought to be Lord Shiva’s sister in his human incarnate.The word Mansa implies desire and it is thought that all the desires of a genuine devotee are fulfilled by the goddess.
Once Mansa, a prevalent girl who was unaware of her full reality from her guardians decided to meet Lord Shiva and ask him about her reality, there’s a folk tale about this.She sat for Sadhana to meet Lord Shiva, and after years of spiritual practice, she was fortunate enough to meet Lord Shiva and explain from him her reality.
After she learned her reality, she gained the world’s welfare goddess powers.Devotees who pray to Mansa Devi to fulfill their desires attach threads to the branches of a temple tree.Once their wishes have been fulfilled, people return to the temple again to untie the tree thread.Coconuts, fruits, garlands and incense sticks are also provided for prayer by Goddess Mansa.
Mansa Devi Temple is a Siddh Peeth (the worshippers ‘ wishes are known to satisfy them).It is one of three such Peethas situated in Haridwar, the other two being the Temple of Chandi Devi and the Temple of Maya Devi. The internal shrine has two deities, one having eight arms and the other having three heads and five arms.
You have to either follow the trekking path up to this holy shrine or ride on the ropeway service to reach the shrine.For the advantage of the pilgrims, the rope-way service known as “Mansa Devi Udankhatola” has been implemented and is also used to transport pilgrims to the nearby Chandi Devi Temple. 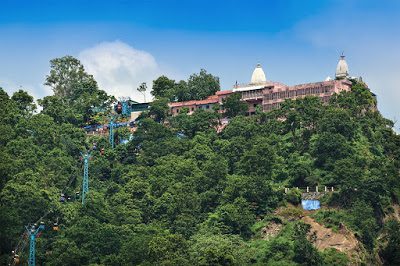