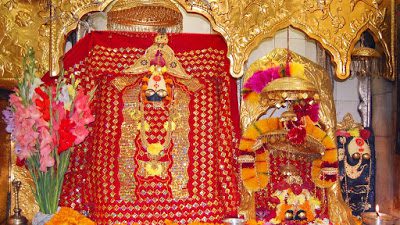 Shri Naina Devi Ji Temple is located on a hilltop, whose base also includes bhagat samadhi Jatt Jeona Morh in Bilaspur District, Himachal Pradesh, India. The Naina Devi Temple is linked to the 21st National Highway. It is possible to reach the temple at the top of the mountain via highway (that curves up to a certain stage around the hill) and then through concrete steps. There is also a cable car facility that moves pilgrims up to the top from the base of the mountain.

Naina Devi’s hills overlook the lake of Gobind Sagar. The lake was formed by the Bhakra-Nangal Dam. The establishment of the temple is connected with several mythological tales.

According to a legend, in Yagna, which afflicted Lord Shiva, Goddess Sati burnt herself alive. He picked Sati’s corpse on his shoulder and began his dance of Tandava. This shocked all the heavenly deities as it might lead to the holocaust. This urged Lord Vishnu to unleash his Chakra, which would cut the body of the Sati into 51 parts. Shri Naina Devi Temple is where Sati’s eyes fell.

Another Naina Devi Mandir related tale is about a Gujjar Boy. Once he grazed his cattle and saw a white cow showering milk on a rock from her udders. For the next few days, he saw the same thing. One night as he slept, in her dreams, he saw Goddess telling him the stone was her pindi. Naina informed Raja Bir Chand about the whole scenario and his dream.

Shri Maa Naina Devi Temple is also known as Mahishapeeth due to the goddess’s demon defeat of Mahishasur. According to the legends, Mahishasur was a strong demon blessed by Lord Brahma’s boon of immortality, but the situation was that only an unmarried female could defeat him. Mahishasur began spreading terror on Earth and Gods because of this boon.

All gods paired their powers to deal with the demon, creating a Devi to defeat him. All gods gave the Devi distinct kinds of Weapons. When Mahishasur was hyped by Devi’s enormous beauty and suggested that she marry him. Devi informed him if he would overpower her, she’d marry him. Maa Naina Devi defeated the demon during the fight and took out both of his eyes. This encouraged Gods to applaud “Jai Naina” with happiness and hence the name. 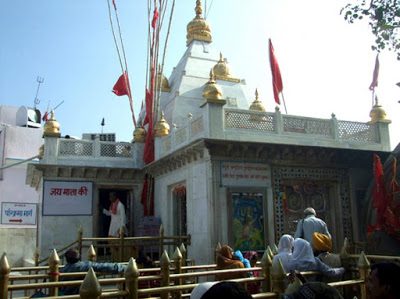