Chamunda Devi Temple is one of India’s oldest 16th-century shrines. The temple is located in the Kangra district of Himachal Pradesh at a distance of 10Km from Palampur, 24Km from Kangra and 15Km from Dharamshala.
The temple is devoted to the goddess Kali, Chamunda Devi. Chamunda Devi temple is also known as Chamunda Nandikeshwar Dham. Shiva and Shakti are thought to be residing in this temple. Lord Shiva lives in the form of Nandikeshwar close to this temple. The temple is located on BanGanga (Baner) river banks. Chamunda Devi temple Kangra is of great religious significance. During Navratri, devotees gather here in big numbers.
Bhagwati Kaushiki produced Devi Chandika from one of Her eyebrows, according to mythology, and assigned Her the task of killing both the Chanda and Munda demons. Between the Devi Chandika and the demons, there was a fierce battle. The goddess finally killed both of them and presented their heads to Devi Kaushiki who in turn gave the Devi Chandika blessings that you killed the Chanda and Munda demons so that you will be worshipped in this world as Devi Chandika.

Palampur’s Chamunda Devi Temple isn’t just any other temple that makes a hill station one of the biggest tourist attractions. The temple also has a lot of history attached to it. The temple is old, and back in the 16th century it originally came into being and has a number of mystical legends attached to it. In fact, there is a certain legend connected with the tale of moving this temple at one point as well. It was about 400 years ago, according to legend, that a king and a priest prayed to Chamunda Devi for her permission to transfer the image to an accessible location. The legend indicates that in the dream of the priest, the goddess appeared and indicated to him the exact location where the idol would be found. The king was informed of this, and his men retrieved the ancient idol and installed it in the place where the temple was now built. 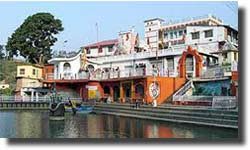