Since 1974, Bhagavan Sri Venkaiah Swamy visited golagamudi and used to remain in golagamudi after 1974. Swamy set the basis for building with his own hand in the year 1980 (now it is Swami vari Samadhi mandiram). Swami left his body on 22 August 1982 and his adherents created Swamy Samadhi in construction (the basis set by swamy) now it was Swamy vari Samadhi mandiram.

In Samadhi mandiram grounds correct side is dhuni and left side is well found. Swamy said about dhuni it was koti lingala pooja kadaiah, meaning if you do pooja for dhuni the outcome is equivalent to pooja worship of one key Siva Lingas.

He had a sister and two siblings. Currently, nobody is alive. For a few days, during the evenings, he came to Sri Siddiraju Ramaiah for personal tuition. He left his studies at his teacher after one or two months of poverty. He has been a lover of loneliness since he was five years old.

He used to say them “brother” when his playmates invited him to play! I committed a theft; now I’m going to be arrested by the police. You’ll also be detained if you’re with me. Please leave me. “When the kids left, he used to sit for meditation behind a door.

Swamy and his friends used to go into the woods to collect date fruits etc. He’s going to sit behind a hedge and meditate. If any of his colleagues are disturbing him, he’ll say the same phrases and give them away. At the age of seventeen, he used to cut firewood and bring it on a bullock cart to Nellore and sell it there. He also took and sold at Nellore the banyan leaves that were used to prepare leaf plates.

At that age, he learned to ploughing at the age of twelve which is impossible. To the greatest satisfaction of elders, he conducted all kinds of agricultural job. He did all the work with so much interest that the people on sight couldn’t but praise the precision of the work

He was suffering from a fever at the age of 20. This made a shift in his life. He used to cry out yogam chakali, yogam jakkali, etc. He was disappearing from his home.He resurfaced in Madras after about twenty years. He came back to Nellore and walked widely around Golgamudi in the villages. He lived in Penna Badvel Thippa for the first time. He came to Kotithirtham later, whom he called his Pandari.He used to light in his samadhi mandir the holy fire or gundam that is still burning. He defined this holy fire as equivalent to a koti  linga worship.

Venkayya Swami was considered a madman by many villagers. They couldn’t comprehend that he was an avadhuta. It was the master of Sri Ekkirala Bharadhwaja who acknowledged him as a wonderful avadhuta and urged many to visit him. Swamy’s life was easy. He always lived outdoors, and by doing biksha to eat. He healed a lot of illnesses.

He used to compose prophetic pramana patras in nature. A visit to Golgamudi is crucial for anyone following the tradition of Datta avadhuta. Even now, Swami is mysteriously protecting his devotees. In many books, Golagamudi Venkaiah Swamy Miracles were recorded.

Visitors can find accommodation in the venkaiah swamy temple.

There is no online booking systems in Venkaiah Swamy Temple. We have to book directly. 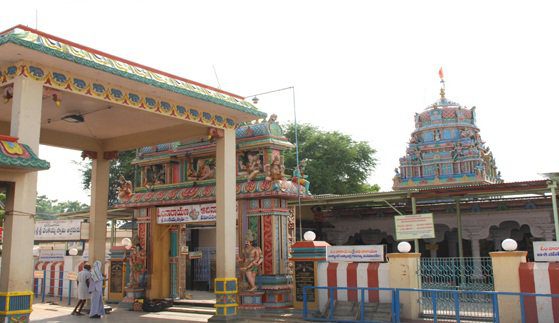